When it comes to ulterior supremacy, India vs. Australia has been the rivalry to watch out for in the recent past. The dynamic personalities present in both sides coupled with the copious talent present makes it all the ingredients needed for an enthralling encounter whenever the sides face each other. 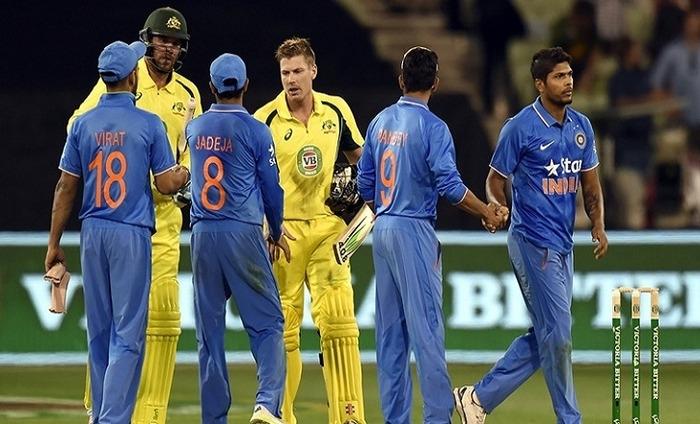 With the highly anticipated India’s tour of Australia kicking off with the shortest format of the game, let’s take a jog down the memory lane and have a look at the best T20 Internationals played between the sides over the years.

Much of the top clashes between these two sides have come up at the grandest stage with the stakes being higher as well. During their clash at Dhaka in the 2014 edition of the T20 World Cup, India got away with a memorable win that stays etched to till this date. Already having qualified for the semi-finals, India took a different approach by opting to bat first for the first time in the tournament.

The Men In Blue were in a precarious position after the top order failed to get going in the sluggish pitch of the Bangladesh capital. The vintage duo of Yuvraj Singh and MS Dhoni had an uphill task with the side at 66-4. The Prince of Punjab was at his absolute best to haunt the Aussies yet again while the skipper duly played the role of an anchor.

With a target of 161 in sight, the Australian batting order meekly surrendered to the Indian bowling line-up. The spinners shone through the pack to pick up 8 wickets with Ravichandran accounting for 4 of them. Only three batsmen from the line-up managed to reach the double figures which resulted in the eventual demise of the side’s future in the competition. India skittled out the tail in no time to dismiss the Australians for a total of just 86 for a sweet victory.

With the firepower that these two sides possess in their batting arsenal, high scoring thrillers are imminent. That’s exactly what happened when the two sides met in the flat dry pitch of Rajkot which reeked of runs.

The Australian openers punished the tame Indian bowling line-up to all corners of the park with Aaron Finch stealing the show with a well made 89. A score in excess of 210 was on the card for the Aussies, but resilient death bowling by the Blues got them a target of 202 to scale down in 20 overs.

Team India were on course with their approach despite the regular loss of wickets. However, a blimp in the middle saw the equation get complex with 101 runs needed off 47 balls. The duo of Yuvraj Singh and MS Dhoni got together yet again to riddle this for the Aussies.

Yuvraj Singh brought the goods against Aussies yet again with an unbeaten match-winning knock of 77 off just 35 balls to see India through the line.

The semi-finals of the very first T20 World Cup in the history of the sport, that’s as high as the stakes can get. A young Indian squad defied all expectations to leap over the initial hurdles of the group stages to make it to the semi-finals considering the nation’s disappointing outing the 50-over World Cup earlier that year.

Australian pace attack led by Brett Lee and Mitchell Johnson were all over the Indian top order on the bouncy track of Kingsmead. Round one of the fixture went to the five-time World Champions after having reduced India to 41-3 after 8 overs.

Yet again, it was Yuvraj Singh who was destined to oust the Aussies. Coming off an incredible showing against England, where he hit six sixes in a single over, the left-handed batsman settled in straight away. A flurry of boundaries followed from Singh’s willow as he slaughtered the white ball en route to an eye-boggling 70 off 30 deliveries. A cameo in the end by the skipper MS Dhoni steered India to a commanding 188/5.

The threat was still imminent considering the strength in the Australian camp. A collective bowling effort led by Sreesanth, helped India sneak past the Men In Yellow by 15 runs to set up a dream final against arch-rivals Pakistan.

The Men In Blue, despite not boasting a good record Down Under, got one up against the Aussies with a whitewash in the T20 Series. Having already sealed the series with wins at Adelaide and Brisbane, the sides moved on to Sydney for the final fixture of the tour.

Despite the stakes not present, the sides put on a thriller for the ages. After electing to bat first, Australian skipper Shane Watson came up with a gem of a knock to get the home side to a mammoth 197/5. The all-rounder scored 124 off just 71 balls to put India under pressure and their chances off whitewash in jeopardy.

A strong start by the in-form Indian openers along with Kohli and Raina setting the tone in middle overs helped the Men In Blue stay in the chase. However, it was up to Yuvraj Singh to finish off the script. With 17 needed off the last over, the flamboyant batsman outsmarted T20 specialist Andrew Tye to mount the total for a historic win.

Going into the 2016 T20 World Cup in India, the hosts were labelled as the favourites, but it did not go as billed after a shock defeat to New Zealand in the opener and a last-gasp victory over Bangladesh.

It all came down to India and Australia in a virtual quarter-final with a place in the semi-finals up for grabs. Amidst the electric atmosphere in Mohali, these sides played a classic for the ages. Despite a quick start by the Aussie openers, the Indian bowlers got back into the game in the middle overs. A huge last over meant that India had to scale down 161 for a potential place in the final four.

The openers could not get going and Shane Watson troubled the team with the ball in the field in what would be his last International appearance. Even the ‘King Of Sixes’ Yuvraj Singh could not rescue India from the quicksand they were drowning themselves in.

With the equation being 39 required off the last 3 overs, Virat Kohli put up a show that stunned the Aussies and brought disbelief to the Indians. The Royal Challengers Bangalore captain smartly used the big ground for running between the wickets alongside MS Dhoni at the other end and saved the best for the last.

Under extreme pressure, the current Indian skipper snatched the game away in the 18th over by claiming 19 runs off James Faulkner to single-handedly win the game for the country.

With flares boiling up before the tour has even begun, will there be any more memorable clashes on this tour considering the current state of cricket in Australia is a question to be pondered upon.

Cricket: Amidst off-field controversy, Virat Kohli asked to stay ‘humble’ by the CoA