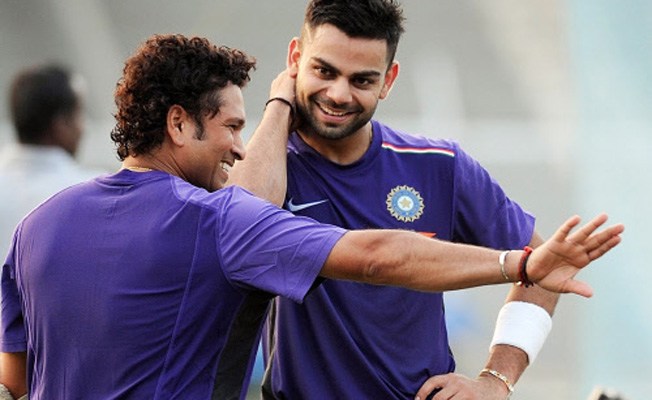 Indian cricketing legend Sachin Tendulkar has praised the current skipper Virat Kohli’s work ethics ahead of the 1st test that starts tomorrow. Sachin said that Virat was one of the best in identifying any weaknesses and rectifying them immediately. 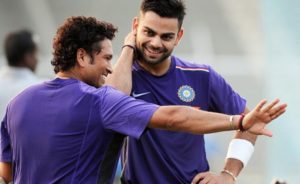 Speaking to Sky Sports, Sachin said that, “I could (always) see the hunger and the fire in his eyes. The best part about him is that the moment he realises there are areas he needs to work on he is immediately back in the nets working on those things.”

“A player can only move forward if he accepts – and it requires a lot to accept and admit: ‘Okay, these are the areas where I have not done well and I need to go out and change these things.” said Tendulkar.

With the previous tour to England ending up becoming a disaster, Kohli will look to get some runs under his belt this time around. In the 2014 series Kohli could notch up only 134 runs in five Tests at an average of 13.40.

“He is in a good space. All he needs to do is try and be in the same space. His method of preparing himself before a tour, before a game is really nice. He should continue with that. There are going to be ups and downs, there could be bad tours, but that’s not the end of the world,” said Tendulkar.

In addition to Sachin, the Indian team coach Ravi Shastri was also in high praise for Virat. He said that Kohli poses a massive influence on the team.

“His work ethics are second to none. The passion that he brings into the dressing room, wanting to play the game as a competitor. He wants to compete and it’s like a disease – people want to emulate him, youngsters want to be like him.” said Shastri.

On continuing, Shastri added that Kohli would certainly turn the tides this time around following the failure in 2014.

“There is no excuse in him, he won’t leave a stone unturned. The effort will be maximum and then you will see the results. He doesn’t want anything easy – if he wants a hundred it should be a tough hundred in tough conditions. That’s what makes him different from a lot of other players,” he added. “He is never one to shy away from a challenge which I think is his biggest quality. I admire his preparation. He wants to excel but he knows there are no shortcuts.”