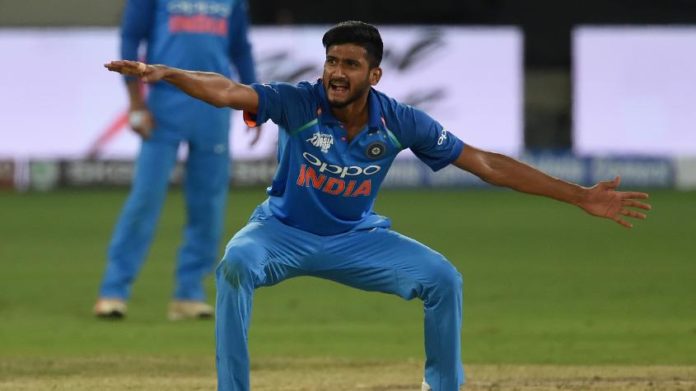 India’s recent pace sensation, Khaleel Ahmed has left every fan awestruck after he produced one of the best spells in recent times vs West Indies at Mumbai. 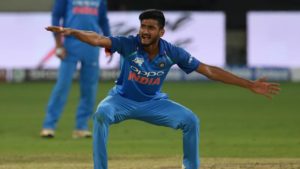 Following the retirement of the veteran, Zaheer Khan, India hasn’t seen a proper left arm seamer. The likes of Jaidev Unadkat and Barinder Sran have always been in and out of the side, failing to live up to the expectations.

Looking at what Khaleel has to offer on the table, team India will feel that he could be an option to consider for the ICC Cricket World Cup next year, taking into account the swinging conditions which will be available in England.

The lad, who hails from Rajasthan has risen through the U-19 levels and now has the remarkable talent of making the ball talk. After making his debut in the recently concluded Asia Cup, the 20 year old hasn’t looked back ever since, improving in every chance he gets.

Also with Bhuvneshwar Kumar currently experiencing a rough patch and Hardik Pandya not in the side following an injury, sees some crucial game time for the young pacer to stamp his mark on this Indian side.

India’s veteran pacer, Zaheer Khan has also had his say on the teenage sensation. As Zaheer puts it, “His length was a drastic difference from what we have seen in his short career. It stood out. It was probably a metre or metre-and-a-half fuller and that was the main difference. That’s why you could see the ball come back in (to right-handers) apart from the fact that he was holding his shape at the crease much better with his front arm.”

“He is a work in progress, and things are bound to keep improving,” said Zaheer

Following Virat’s praise for the youngster in the post match press conference, India’s opening batsmen Rohit Sharma too couldn’t hold back his words.

“Khaleel is a promising prospect. With a left-arm seamer, you always have that edge. And the way Khaleel swung the ball today, he would have troubled any batsmen. He is maturing pretty fast. The World Cup is still a long way off with lots of games remaining and I wouldn’t say spots have been guaranteed to anyone. I hope he continues to do well. We are playing in New Zealand and then the World Cup in England, where the ball swings a lot. He could be quite handy there,” said Rohit.

With such expectations being levied on him after just a few games, one will hope that Khaleel does not see this as a burden but will work harder to reach greater heights. With the Australian tour coming up next month, Khaleel will once again see this as an opportunity to impress the selectors and be a key contributor to the nation’s success.