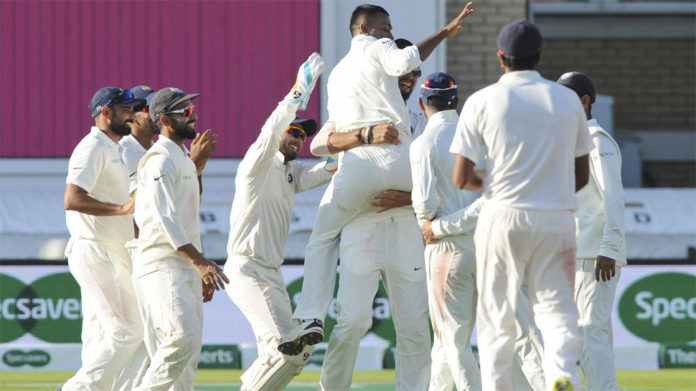 Jasprit Bumrah produced a brilliant spell with the second new ball to put India in the brink of victory as they need just a wicket to win the 3rd test here at Trent Bridge. The fast bowler picked up Jos Buttler and Bairstow in successful deliveries to put the game back in India’s favor when things were just slipping out of hand. 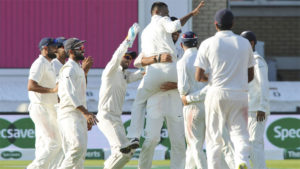 England who were set a target of 521 runs in their second innings ended day 3 on 23-0 needing another 498 runs to win the game. Coming back on day 4, India wasted no time with Ishant Sharma picking up both the openers. Root and Pope tried to stitch a partnership in order to save the game but failed to convert their starts and fell soon.

With England reeling at 62-4, it looked like a matter of time before India would close the game. But the incoming pair of Jos Buttler and Ben Stokes had other ideas. The duo joined hands to put on a 169 run stand that turned the tides in England’s favour.

The partnership saw Buttler reach his maiden century and Stokes score a gritty 62. When things were just looking to slip out of hand, Jasprit Bumrah came back at the right time to wreak havoc with the second new ball. He first picked up Buttler and then followed it up with a peach of a delivery to remove Bairstow for a golden duck.

Pandya soon joined the party to produce the edge to remove Stokes. Bumrah then picked up Woakes and Broad quickly to claim his second 5 wicket haul. The last pair of Rashid and Anderson then saw it till stumps to take the game into the last day. England now stand at 311-9 needing another 210 runs to reach the target.

India need just another wicket to claim their first win in this test series. Their efforts to wrap up the game as early as yesterday failed as Rashid and Anderson survived the final few overs to see of the day. They will look to spend some more time on the field today to just frustrate in Indians while the visiting team will look to wrap up the contest in quick time.