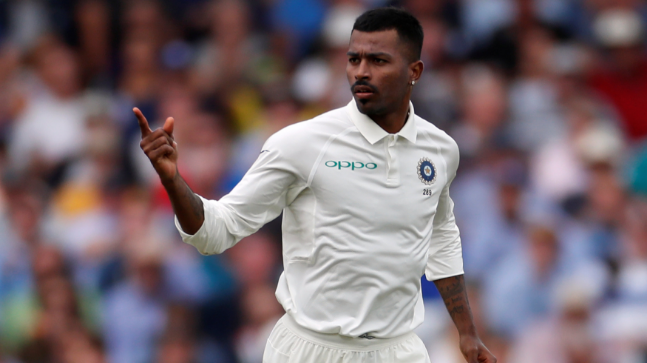 Hardik Pandya picked up his maiden five wicket haul in test cricket as India sit comfortably in the driver’s seat at the end of day 2 in the 3rd test vs England here at Nottingham. 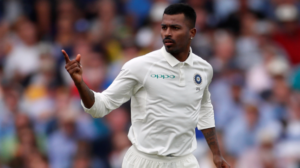 Put into bat by the host’s, team India ended the first day on 307-6 after Virat Kohli and Ajinkya Rahane put on a 159 run stand for the fourth wicket. Coming on to continue where they left off, team India set out to add some crucial runs to their overnight score.

But to their dismay they could add only 22 runs to as Anderson and Broad came on to pick two apiece to bundle out India for 329. Woakes, Anderson and Broad each ended up picking 3 wickets while Adil Rashid picked up the only wicket of Virat Kohli.

England batsmen who then set out in pursuit of this total got off to a brisk start putting on 54 runs for the first wicket. This was then quickly followed by two wickets of successive balls that saw both the openers back in the dressing room.

The batsmen who followed never hung in for huge periods and threw away their wickets in quick successions. Hardik Pandya came on into the attack to pick up his first 5 wicket haul in tests in just 6 overs. His 5 wicket haul included price scalps of Joe Root and Jonny Bairstow which put a stop to the run flow.

Bumrah then returned to pick up the final wicket of Jos Buttler to end England’s innings at 161. This gave India a lead of 168 runs going into the second innings. Hardik stood as the pick of the bowlers picking up 5 while both Bumrah and Ishant chipped in with a couple of wickets.

With a healthy lead behind their back, India once again set out to bat on the same day. Similar to the first innings the opening pair of Shikhar Dhawan and KL Rahul gave India a solid start. Going into stumps, India stood on 124-2 with a lead of 292. Kohli and Pujara were unbeaten at the crease after Dhawan and Rahul had scored 44 and 36 earlier.

A day which saw 16 wickets fall clearly proved to be the moving day in the test match. With the match clearly in India’s hand it will be interesting to see how much long they bat from here before handing over the bat to England.