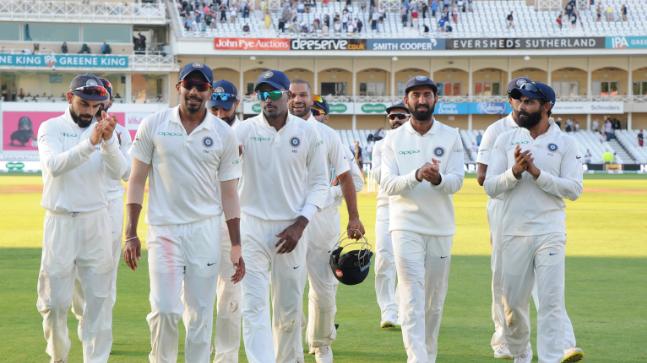 Virat Kohli starred in both innings as team India clinched their first win of the series, beating the host’s England by 203 runs in the 3rd test here at Nottingham. 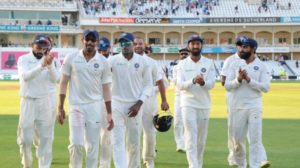 Coming into the game following a drubbing at Lord’s, India needed to prove themselves big time if they were looking to avoid further criticism. The first two matches saw them fall like nine pins, with their batsmen apart from the skipper Virat failing to contribute.

To counter all the problems they had, India got in Shikhar Dhawan and debutant Rishabh Pant in place of Vijay and Karthik. Also the bowling department saw Kuldeep being replaced by Jasprit Bumrah.

The changes seemed to pay of immediately as Dhawan along with his opening partner of Rahul got India to a solid start in day 1. This was then followed by a 159 run partnership from the pair of Virat Kohli and Ajinkya Rahane which put India in a commanding position. The duo came close to their centuries but both missed out falling for 97 and 81 respectively. The lower order did not last long and India ended the 1st innings at 329.

After scoring their first total in excess of 300, India set out to defend it. They did it in style picking up wickets in regular intervals and dismissing England for a mere 161. Hardik Pandya picked up his first 5 wicket haul in tests in the process. Thus India got a lead of 168 runs going into the second innings.

In the second outing, India made no mistakes and kept on adding to their lead. Kohli who had missed out on his hundred in the first innings put up a huge partnership with Pujara for the 3rd wicket and scored his 23rd test century in the process. A quick fifty from Hardik Pandya in the end of day 3 saw India declare at 352-7 setting a daunting target of 521 for England.

The host’s who had to see off over 2 days of play lost wickets in quick succession to surrender the game. Buttler and Stokes tried reviving their innings by stitching a partnership. Buttler reached his maiden century and Stokes scored a gritty 62 but it just wasn’t enough for England. After the duo’s departure, the rest of the wickets fell quickly and England ended their innings at 317 losing by 203 runs. Jasprit Bumrah was the pick of the bowlers this time around picking up 5 wickets.

With this win, India now come right back into the series with two more matches left to play. They will look to take this form into the 4th test that starts on 30th August and put up a similar kind of display.