Later this year, India is scheduled to field against England and Australia to play 9 test matches with the division of 4 against the Aussies and the rest against the Englishmen.

The Indian skipper Virat Kohli has made a record of winning 60% of the total 35 test matches he has led after taking over from MS Dhoni. While Test match wins outside the sub-continent against strong opposition don’t come easy, the onus would be on Kohli and his team to prove. 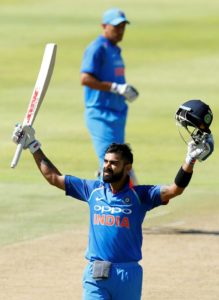 South Africa’s leading bowler Dale Steyn, playing for Hampshire in the current county season says that Virat Kohli has been changing his squad quite often as he has recently experimented with an aggressive option of Rohit Sharma at No.3 to Ajinkya Rahane at one down before gifting back Pujara his slot. Steyn believes that Virat will pick up a squad which has the potential to win him games. Steyn further stated, ” As long as Virat is there, he is a master and knows what to get out of his players. He is quite an aggressive captain and he likes to win. So he will pick teams to win Test matches.”

“Virat will do fine. He is a determined player. When people write him off, that’s the biggest mistake. When you write Virat off, he will come back and bite you where you don’t want to be bitten. So he will be fine in England,” Steyn says. The South African pacer is very hopeful that Virat will do wonders with the Indian squad as he matures and plays more with them.

England vs. India: Essex prove tough for the Blues in warm-up fixture

Cricket: “How Indian batsmen play Anderson will be the key,”says McGrath