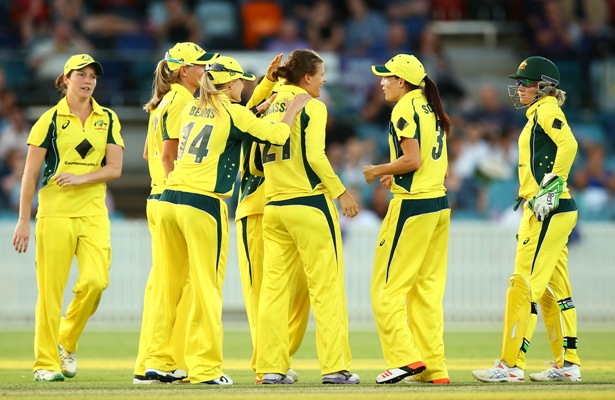 The opening game of the three-match ODI series between Australia A Women team and India A women was a one-sided affair with the visitors picking up the victory by 91 runs.

Opting to bat first after winning the toss, the Aussies put up 271/8 in the allotted fifty overs at the Bandra Kurla Complex facility. Tahlia McGrath shone in the pack with a well made 58 off 66 deliveries. The 22-year-old hit 10 fours and a six in the knock.

McGrath was well supported by Heather Graham and Naomi Stalenberg who narrowly missed out on their half-centuries. A quickfire cameo of 37 by skipper Molly Strano guided the team to the 270 run mark.

The Indian women were never in the chase as the visitors skittled the top order to leave the hosts at 55/6 at one stage. Shikha Pandey and Preeti Bose offered some resistance down the order with a 60 run stand for the seventh wicket before ultimately bundling out for 180.

With figures of 3-23, Molly Strano made her presence felt with the ball as well after her cameo at the latter stages of the first innings.

Australia lead the series 1-0 with two more matches to go. The second fixture is slated to take place on October 17 at the same venue.

Cricket: Virat Kohli singles Umesh Yadav out of praise for his performance