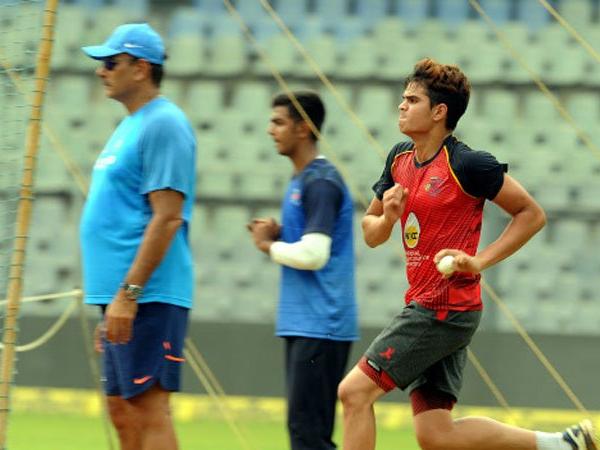 Arjun Tendulkar, son of legendary cricketer Sachin Tendulkar trained with Team India at London as the squad continue their preparation for the upcoming tour of Ireland and England.

The 18-year old left arm pacer, ran in fast to Kohli and co. with some quality pace in the nets to give a feel for what is to come in the feisty English conditions.

Arjun received his maiden call-up to the U-19 squad for the upcoming tour of Sri Lanka in July. The youngster was also seen bowling in the nets at Lord’s a few years ago with the England squad.

Arjun also had the privilege to bowl at his home ground of Wankhede during Team India’s practice session during New Zealand’s tour to India.

At the end of the session, the youngster was seen in a lengthy chat with coach Ravi Shastri who had “words of advice” for the player who is set to begin his journey representing the nation.

Words of wisdom from @RaviShastriOfc for young Arjun Tendulkar. pic.twitter.com/AEU8SOblC0

Watch Arjun Tendulkar steaming in towards the Indian batsmen in the video below (from 1:01)

India vs Ireland: Key players for the Irish that can shock India