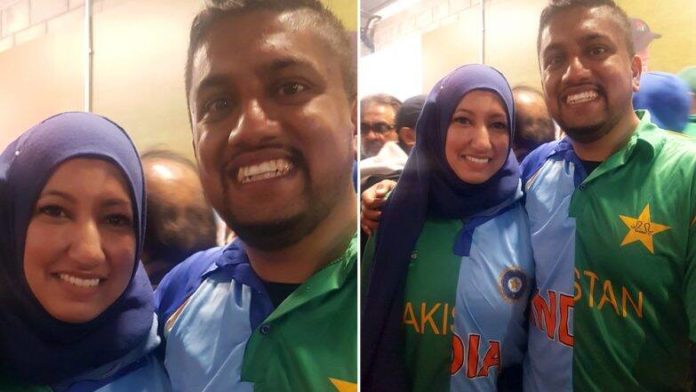 Team India defeated Pakistan by 89-runs at the ICC World Cup 2019 which took place at the Old Trafford cricket stadium in Manchester.

For the seventh time in the row, India managed to beat Pakistan in the world cup. With over a billion people tuning in, Boys in blue made sure to not disappoint Indian fans both in the stadium and those watching it back from home. 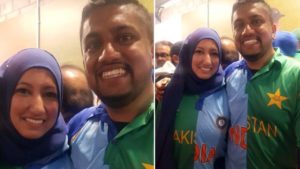 India is now 7-0 against Pakistan in a world cup tournament. Batting first India set a mammoth target of 337 runs. Batting second Pakistan, chasing 337 batted extremely poorly and dropped and lost six wickets with the score of only 166 before a rain delay saw their target revised to another 136 runs required from 30 balls via the Duckworth Lewis method.

There’s always a tension building up during an Indo-Pak cricket match, both on the field and on the borders.

However, a recent picture of Canadian couple wearing Indo-Pak jersey which has imprint if half-Indian jersey and half-Pakistani jersey is going viral and for the right reasons.

Spotted this couple at the #IndiaVsPakistan @cricketworldcup game and was intrigued by their jerseys! Husband is from Pakistan, wife from India so both stitched up India-Pak jerseys & wore them! Both are Canadians, watching the game in England, rooting for peace #SpiritofCricket pic.twitter.com/KrUjtkjFMn

You couldn't get anything better than this, we need to look beyond @MirzaSania & @realshoaibmalik for the real inspiration and unity among the people of #india and #Pakistan #CWC19 #INDvPAK https://t.co/8hsGm5i68a

Would have been better to have a thin strip of England jersey in between… https://t.co/niXQ8ANi7x

No matter who won the match yesterday, but this is something which will make you feel United..
United by humanity; divided by partition #IndiaVsPakistan #ICCWorldCup2019 https://t.co/7ySmeQ8jjw