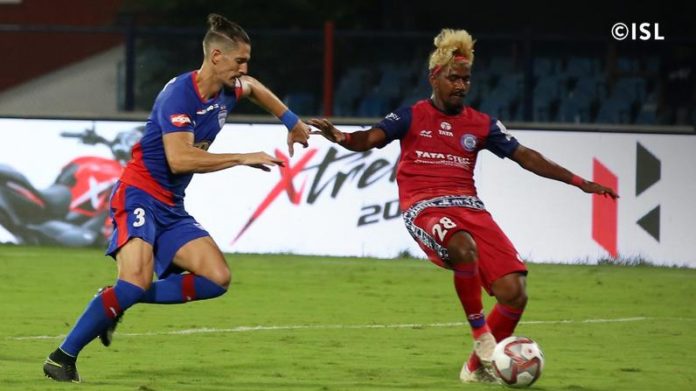 Gaurav Mukhi came on as a substitute at the 71st minute for Jamshedpur FC in their game against Bengaluru FC and even scored an equalizer.

Before the kick-off, the commentators mentioned him to be only 16 years old. They didn’t backtrack from their statement as they exclaimed on top of their lungs when the striker scored the goal. However, now it seems that Gaurav Mukhi isn’t 16.

The official ISL match report of the game mentioned him to be 16 years old, but its edited version reads, ” Gourav Mukhi scored Jamshedpur’s first equaliser in the 81st minute, his maiden goal in the Hero ISL.” However, Jamshedpur FC is sticking to their word as an excerpt of their match report reads, “And then came the moment of the 16-year-old! Mukhi was found brilliantly by Mario Arques as the teenager went through on goal.”

All this trouble started when Jharkhand had won the 2014-15 Sub Junior National Football Championship. Five players of the Jharkhand squad were called by AIFF in order to prepare for the FIFA U-17 World Cup which was going to be held two years later, and Gaurav Mukhi was one of them. However, all of them were found to be “considerably overage” and Jharkhand was stripped from the title. But, Jamshedpur FC registered him as a 16-year-old in the ISL, and the commentators fell for it.

Disciplinary action isn’t likely to be taken against Gaurav Mukhi nor Jamshedpur FC as ISL is not an age-limit tournament. However, if he wants to come out unscathed, he will have to disclose his real date of birth with proof.

Sportsindiashow even published an article praising Gaurav Mukhi’s striking ability as a 16-year-old. We would like to apologize for the same.