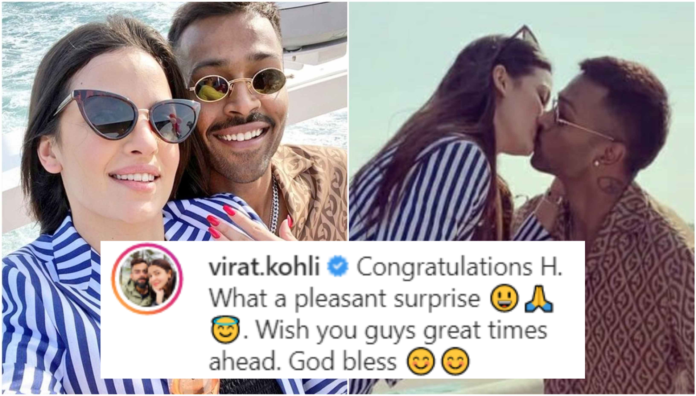 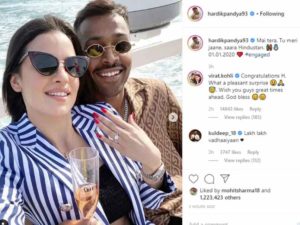 Hardik started the new year posing with Natasa Stankovic posing on Instagram with the caption reading: “Starting the year with my firework.”

Starting the year with my firework ❣️

He then announced his engagement with the caption: “Mai tera, Tu meri jaane, saara Hindustan. 01.01.2020 #engaged“.

Natasa also posted a video on Instagram of Hardik proposing to her with a ring.

As soon as the pair announced the news of their engagement, cricket and Bollywood fraternity also congratulated Hardik Pandya.

“Best wishes on your engagement 🤗May your relationship always be filled with lots of love and happiness.
On your engagement, I wish you both a wonderful life and an everlasting love. 🤗🤗,” Bollywood actress Urvashi Rautela said.

“This is sooooo lovely!! Huge congrats to you both 💗💗,” Sophie Chaudhary said.

Hardik Pandya is currently recovering from a back injury that saw his seating on the sidelines in the Twenty20 International (T20I) and One-Day International (ODI) series played against Bangladesh and the West Indies last December. He underwent treatment in London in October of 2019.

He was last seen in action against the South Africa series in September of 2019.

“We thought this was the right time because even if I take four months, I will be coming back before the New Zealand series, mid-way actually,” Hardik Pandya said in an interview as to why he decided not to delay his surgery.

“That was the plan that I play some international games, the IPL and then the World T20. The biggest concern was the World T20 which touch wood is now in place,” he added.