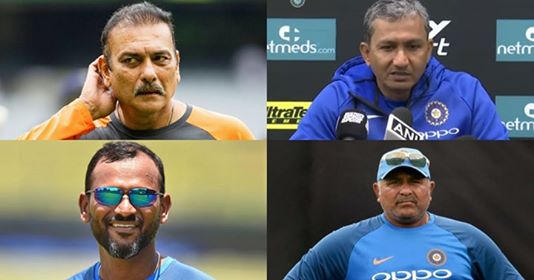 The BCCI has invited for applications for the position of the Indian team’s next head coach. However, the board has put forth some conditions for the selection. According to the BCCI, the applicant must be under 60 years of age and should have at least 2 years of international experience.

The last time BCCI was looking for a coach, there was a nine-point criterion. However, these nine points did not include focus and clarity. On the other hand, this time it is just a three-point criterion. And these three points apply for all coaching positions.

According to a BCCI official, the current coaching staff will get an automatic entry for another term.

For the head coach, there should be an experience of coaching a test playing nation for a minimum of 2 years. However, if it is an IPL team or an associate nation, it has to be a three-year experience. Another condition is that the applicant must have played 30 test matches or 50 ODIs.

The batting, bowling and fielding coach also have the same criteria. However, the number of matches is down to 10 tests or 25 ODIs. Also, they should be less than 60 years old.

The current group of coaches will be replaced after the West Indies tour which will be from the 3rd of August to the 3rd of September. This comes after they were given a 45-day extension post the World Cup.

All the current coaches are eligible for re-application. However, the physio and trainer will be newly appointed candidates.

Ravi Shashtri, the current head coach, was appointed in 2017. Shashtri was also the director of the team from 2014 to 2016. Under him, India has been unable in winning a single ICC tournament. However, India did win their first Test series win in Australia.