Before you enter the world of Online Casinos, Check out the top 10 Live casinos recommended by India Casino Info
Home Cricket The coming of age for Tewatia & Samson 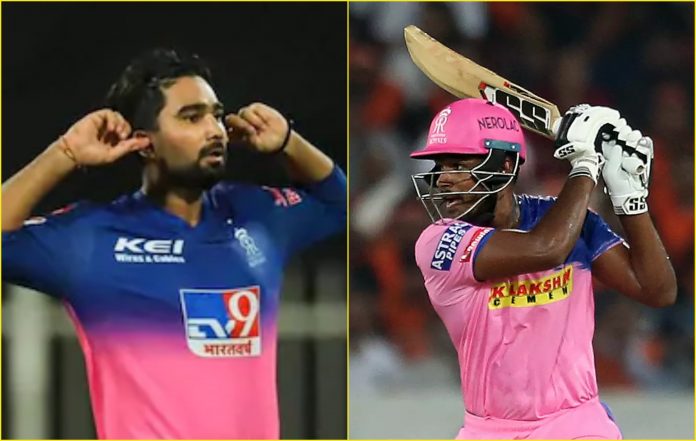 T20 cricket is notoriously known for twists and turns. On Sunday during an IPL encounter between the Rajasthan Royals and Kings XI Punjab, the cricketing world watched the greatest turnaround in a player’s fortune thanks to Rahul Tewatia’s stunning match-winning knock for Rajasthan Royals against Kings XI Punjab. Apart from Tewatia, Sanju Samson too, was talk of the town as he continued his purple patch with a stunning 85.

Chasing a stiff target of 224, Royals promoted Rahul Tewatia at number four. The moved seemed to have backfired spectacularly as Tewatia limped to 5 off 13, 14 off 21 and 17 off 23.

The score was 100 for 2 at the end of nine overs when Rahul Tewatia joined Sanju Samson in the middle. And while Samson kept playing the big shots, Rahul Tewatia was struggling at the other end.

Tewatia is the kind of player who will not get a lot of opportunities. His leg-spin is not classic, his batting unproven. It shows how his home state Haryana struggled to find him a regular spot in their sides.

But Sunday’s blitz at Sharjah could just be the making of the 27-year old leg-spinner-who proved to be a hero with the bat.

The result was RR finishing 226/6 with three balls to spare – the highest chase in IPL bettering RR’s own record of 215 against Deccan Chargers in 2008.

Although Tewatia was eventually dismissed for 53 off 31 balls in the penultimate over and Riyan Parag was bowled by Murugan Ashwin in the final over, with just two needed off the last six balls it was really a walk in the park for RR.

With the asking rate shooting up to 14 an over, in-form Sanju Samson decided to take risks and hit Glenn Maxwell for three sixes in the 16th over. However, Mohammed Shami returned and got Samson caught behind for 85 off 42 and that seemed to be the match for KXIP. On the back of two magnificent performances, Samson surely is making a strong case for the comeback in the national fold.

After Samson’s dismissal, the onus was on Tewatia, who was struggling to time the ball.
Tewatia, though, had other plans, as he seemed to have flipped a switch and went on a rampage smashing 36 off the next eight balls he faced. Tewatia’s dramatic change of heart somewhat overshadowed Mayank Agarwal’s maiden IPL hundred. Agarwal batted out of his skin, scoring 106 off just 50 balls with 10 fours and 7 sixes, and was well-accompanied by skipper KL Rahul, who hit 69 off 54.

Pooran’s effort created waves on social media with commentators and experts singing paeans to the Caribbean’s effort, but it was of little consolation in the end as sixes that were beyond Pooran’s or anybody’s reach and landed in the empty stands of Sharjah or in the streets beyond.

Mr @rahultewatia02 na bhai na 😅 thanks for missing one ball ! What a game congratulations to rr for a spectacular win !!! #RRvKXIP @mayankcricket great knock @IamSanjuSamson brilliant !

Such was the impact of Rahul Tewatia’s cameo, that it overshadowed a batting masterclass by Kings XI Punjab openers KL Rahul and Mayank Agarwal. The Karnataka duo shared a 183-run opening stand and laid the platform for a high-scoring match on the flattest of decks in Sharjah. Agarwal batted out of his skin, scoring 106 off just 50 balls with 10 fours and 7 sixes, and was well-accompanied by skipper KL Rahul, who hit 69 off 54 en route to earning an orange cap.

With the fall of Sanju Samson’s wicket, KXIP heaved a collective sigh of relief. They somewhere thought that the game was as good as won, but little did they anticipate what was coming their way.

The first 19 balls of his inning, Tewatia had scored just eight runs, with no boundaries, while the next 12 balls produced 45 runs, 42 of which were hit in sixes (seven sixes).
It’s never over till it’s over in the IPL, and who knows it better than Sheldon Cottrell. Cottrell who had bowled so well for them in the previous two outings had a night to forget in Dubai.

Pooran’s tremendous fielding effort created waves on social media with commentators and experts singing paeans to the Caribbean’s effort, but it was the left-hander from RR who stole the thunder of many great performances of the day and ensured a name for himself in the record books.

Gavaskar, Anushka and all the social-media melee!