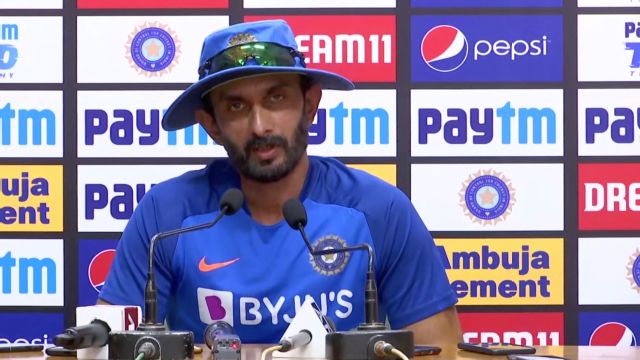 Vikram Rathour, India’s new batting coach, has emphasized on batting first and setting up a formidable target as the team starts preparing for next year’s T20 World Cup in Australia. The coach reckons that the team is well set to chase down a target, but requires improvement when it comes to setting up a total.

“Basically, trying out different players and combinations. Like in the last series, we deliberately batted first which we lost. That’s one area we need to work on. We need to bat better when we bat first in T20I cricket. We chase pretty well. That’s one area we as a team are looking to improve,” Rathour said ahead of the three-match T20I series against Bangladesh.

While the number 4 position is a headache for the management and the selectors, the batting coach insisted on not making any changes while preparing for next year’s T20 World Cup.

“You cannot be changing too much when a big tournament is coming,” he said.

“We need to know what’s the core of our team and maintain that core and in between try out new few players. Hopefully, if and when they do well, that can help our team combination.”

When asked about the team’s strategy against Bangladesh, Rathour claimed that he expects the guests to put up a tough fight, even without their star players, Shakib al Hasan and Tamil Iqbal.

“Missing out on top players, of course, makes a difference to the team. But T20 is the only format where you don’t players miss too much. But the amount of T20 cricket that is there being played in Bangladesh, I am sure they have good players.”