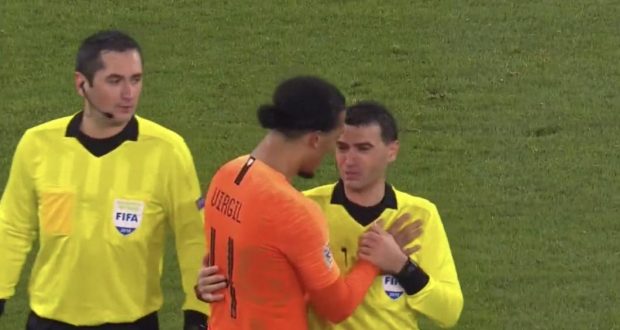 Liverpool’s Dutch defender Virgil van Dijk showed his class after helping the Netherlands to advance to the next stage of the Nations League by consoling the referee whose mother died before the match with Germany.

While the 75m pounds Liverpool defender caught the eye as a striker for the Dutch with his magnificent equalising volley in the final minute of a 2-2 draw at the Veltin-Arena in Gelsenkirchen, it is fair to say his behaviour seconds after full-time was more admirable.

The Romanian referee Ovidiu Hategan was shown to be in tears but he still decided to officiate the fixture despite the news emerging of the death of his mum.

“That man broke down, stood with tears in his eyes because he had just lost his mother,” said van Dijk.

“I wished him strength and said that he had blown well. It’s a small thing, but maybe it helps him.”

The Netherlands' match-winning hero took time out from the celebrations to console the match referee over a bereavement.

Germany had forged a two-goal lead courtesy of Timo Werner and Leroy Sane inside the opening 19 minutes only to be pegged back in the closing minutes with Quincy Promes scoring before van Dijk expertly walloped Tonny Vilhena’s cross beyond Manuel Neuer in the 90th minute.