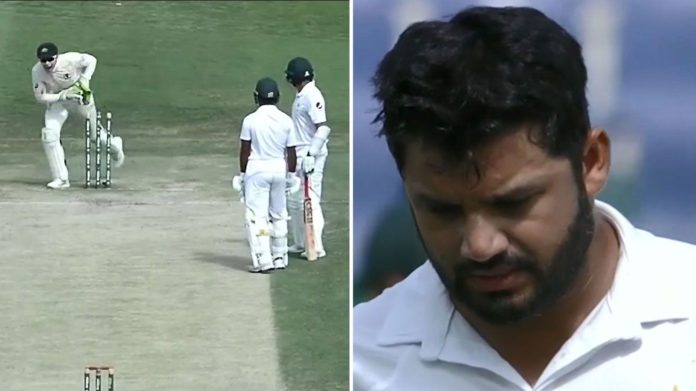 The freakish episode took place on Day 3 in the 53rd over of Pakistan’s second innings of the 2nd test. Pakistan were going strong at 160 for 3. It was Australia’s Peter Siddle who was bowling, and Ali, who was well-set on 64, edged a delivery past gully on the drive, the ball ran towards the rope. Both the batsmen on the crease assumed that it was going for a four, and Ali decided to get involved in a discussion with his partner Shafiq in the center of the pitch.

But on the contrary, the ball had in turn slowed down as it rolled closer to the ropes and stopped just short. An alert  Mitchell Starc gasped his way over to the third man boundary to pick the ball, all while the batsmen were unaware of the fact that the ball was still in play.  The left-arm seamer briskly threw the ball to an antsy Tim Paine behind the stumps.

As Tim Paine dislodged the bails Ali and Shafiq stood thunderstruck for some time, trying to get hold of what had just happened before the umpires asked Ali to leave the pitch as he had been run out. It was schoolboy stuff from the experienced Pakistan batsman. All the hard work from the previous day was undone by utter callowness. Nonetheless, Pakistan is currently in a dominating position with Australia needing a monstrous 491 more to win the game, and two days to survive a draw.