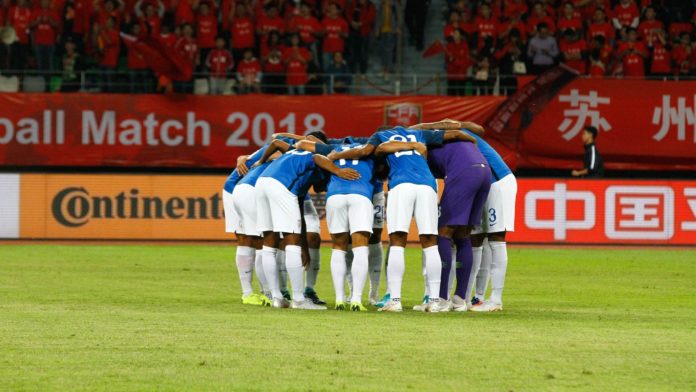 China failed to overcome a rock-solid Indian defense as they settled for a 0-0 draw at the Suzhou Olympic Sports Centre in the international friendly. India, too, had their own share of half-chances from counter-attacks and set pieces but failed to capitalize on them.

China began the game on a frenetic pace and could have taken the lead at the 7th minute itself when Dabao met We Lei’s cross but Sandesh Jhingan did well enough to clear the ball for a corner kick. It was India’s chance to have a shot at goal at the 13th-minute when Anirudh Thapa laid the ball for an onrushing Pritam Kotal, however, the right back’s shot was parried away by the Chinese custodian.

China could have broken the deadlock in a span of ten minutes, first at the 15th minute and then at the 24th minutes, but both the times Gurpreet positioned himself perfectly to avert the danger. China continued to attack from the wings, but the Indian defenders did well enough to not them give a clear-cut chance. Meanwhile, the Indian midfielders did a brilliant job of slowing down the pace of the game as both the sides went into the tunnel with level peggings.

China’s tale of missing chances continued in the second half as Gao Lin hit the woodwork at the 50th minute, and Yu Hai’s free header at the 55th-minute didn’t pose any problem for Gurpreet. The Red Dragons’ tryst with hitting the crossbar continued at the 71st minute when Gao Lin chested and laid the ball for an unmarked Wu Lei, but the Shanghai SIPG striker’s volley couldn’t find the back of the net.

Gurpreet continued his string of saves at the 76th-minute when he had to pull off an acrobatic effort to palm away Xiao Zhi’s header. The resultant corner kick bought in further danger as Gurpreet was down for a moment, but Sandesh and Anas crowded the goal-line to deny the Chinese strikers any space whatsoever.

It looked as if India would walk away with the victory at the 93rd minute when Nikhil Poojary’s through pass from the right wing pierced between the two central defenders. Farukh Chaudhary did latch on to it, but his grounder wasn’t powerful enough and scuffed away by Junling.

The Indian defense was caught napping at the 95th-minute but Gurpreet made two saves in a span of thirty seconds to ensure the scoreline remained the same. The referee blew the final whistle seconds later as India came out unharmed in its first-ever match at the Chinese soil.

India needs to be more creative in the attacking third so that strikers get more opportunities to score goals. This was, inarguably, the best performance by the Indian defense who had been rock solid. Sportsindiashow predicted the game to finish in a 1-1 draw. Although we got the scoreline wrong, we did get the result correct.

Here are the highlights of the game (Credits: Romen Reigns Youtube channel)