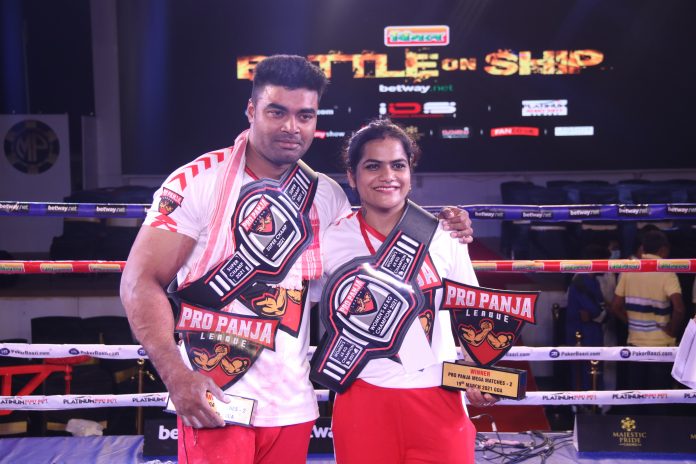 The Pro Panja Mega Matches-2 were held along with the main event boxing match between Vijender Singh and Artysh Lopsan on the rooftop of the Majestic Pride Casino Ship. 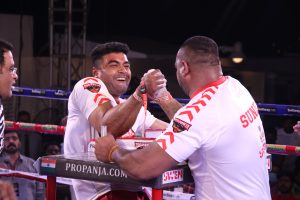 While the scoreline might suggest that Malakar breezed through to victory over Sunil, however, it was a neck-to-neck fight between the Arm Wrestlers in the main event of the Pro Panja Mega Matches-2. The match had its share of drama with both athletes facing numerous fouls as each of the rounds in the match ebbed and flowed in favour of both sides. But Malakar ensured that he followed a technical game plan which helped him to overcome Sunil’s power and find a way to finish on the winning side on each of the three rounds.

After his big victory, Malakar said, “I am very happy about my victory, but the bigger thing is that I have won on such a big platform. This is really big for me. Big thanks to Pro Panja League for the support and promotion of Arm Wrestlers because of which we got an opportunity to showcase our capabilities on such a platform.”

The Under-65 kg Champ Chetna Sharma wrapped the first round without dropping a sweat as Parmpreet found it difficult to stay in the contest. In the second round, Parmpreet tried to put up a better fight, but Chetna held her composure and confidently closed out the second round in a matter of seconds to take a 2-0 lead in the match. The wrestlers’ hands slipped in the opening seconds of the third round and therefore had to restart their round. Once they formed a strong grip, Chetna rode on the momentum from the previous rounds and closed out the match with a 3-0 victory to win the Pro Panja League Women’s 65kg Champion belt.

“I was out of practice in the last four-five months, but I still managed to win. I am feeling really good and the platform here is superb. I am really proud of myself as I have got an opportunity to compete on a platform like this. I would like to thank Parvin Dabas (owner of Pro Panja League) and Preeti Jhangiani (owner of Pro Panja League) for giving me this opportunity to play,” said Chetna after her victory.