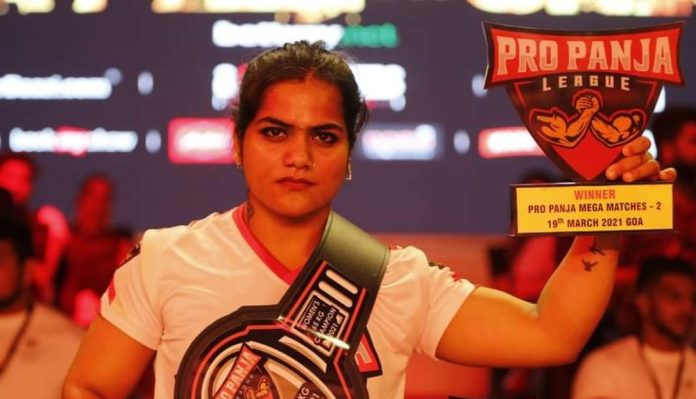 Many Arm Wrestling fans are wondering about the latest absence from Chetna Sharma. The Sports India Show had the opportunity to chat with Chetna Sharma where she revealed that she is nursing an injury that has been bothering her for some time now.

“I have had the injury for a couple of months now, however, it wasn’t that severe and wasn’t bothering me all this time, but in the last few weeks, the severity of the injury has increased. On 13th March, I participated in the district tournament and I felt very good and I had no underlying problems going into that tournament. Then I participated in the State championships on 27th March and I was training hard for it and during that time I started feeling minor pain in my inner biceps and shoulders. I was also having pain during pronation as I prefer top roll more than any other move in Arm Wrestling. This rang alarm bells inside my head and I then convinced myself that it was a minor injury and I will recover soon.

“So as State Championships were over, the Nationals were coming up in June and since it was a National Championship, I decided to train hard and usually ahead of the big competition we lift heavy weights, but in the month of April, I didn’t train in the gym at all because of the pain, but I thought that the injury would go away by the month of May, but it didn’t happen but my injuries kept getting worse. I decided to not lift heavyweight and just do table practice, but even during that the pain increased, but still I was ready to go to the Nationals.

“But as the pain kept on increasing, I told myself that I won’t be able to perform at my optimum level and won’t go past a couple of rounds. Then my fate turned to worst as on the day of my train journey to Delhi on 27th May, I slipped from the staircase and twisted my right ankle, but still, I thought that the Nationals are five days away and I will recover by then, but on the same day, I suffered a finger injury on my index finger and it’s been almost a months since that day and my index finger is still not okay. Then I decided not to test my luck. I could have still competed in the Nationals despite my ankle and finger injury, but my shoulder injury had worsened.

Chetna Sharma then revealed that the injury has gotten better in the last couple of weeks. She said that she was able to get to the bottom of the origin of her injury where she revealed that it was her rhomboid muscle that was giving her problems.

“10 days back, my husband Nayan Nyoti Bora decided to check my Rhomboid Muscle and he found a bend and there was a spasm and this usually happens because of the heavy lifting. That was the whole origin of my pain which I wasn’t able to recognize initially. My husband then gave me a massage on my rhomboid region and you won’t believe that for five minutes all my pain in my biceps and my pronation region was gone for like five minutes as if there was no pain. Then we realized that the problem originated in that bend on my rhomboid region which was caused by a heavy workout. So far the last 10 days I have been getting regular massages and my spasm is decreasing in size and more spread out I am feeling much better since then,” Chetna Sharma said.

“The ranking tournament is exactly a month away and what I have noticed over the last couple of days is that the spasm is getting smaller and smaller and I think it might disappear over the next 10 days. But that is not enough as I also need adequate time to train and prepare for such a big tournament. Even today I am not able to train at the level I am used to training at and to be able to compete at such a professional level I have to do my best.

“With that being said, if I feel like I have had a good workout and training regimen which I feel is self satisfactory, I will most definitely participate in the ranking tournament,” Chetna concluded in the interview with The Sports India Show.

We also reached out to the head of the Assam State Arm Wrestling Association, Mr. Pran Pratim Chaliha to get his thoughts on the whole scenario.

“As I discussed with her husband two days ago, as per him she still little not so well to compete. So I think she will be the right person about her health condition for getting clearances. We have no objection on our part for her to compete at the Ranking Tournament,” Pran said.

We also had the opportunity to chat with Pro Panja League owner Preeti Jhangiani about the availability of Chetna Sharma.

“We are all praying for Chetna Sharma and we hope that she gets better and is hopefully able to join us for the Pro Panja League ranking tournament in Gwalior.” she said.