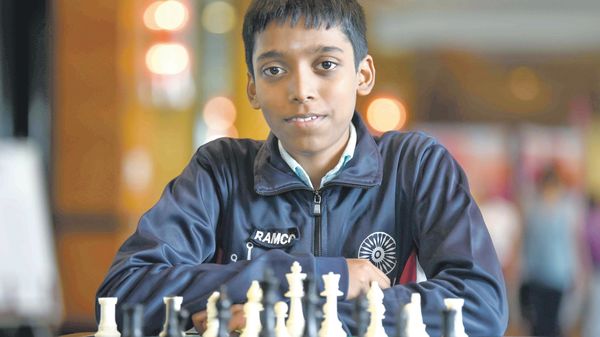 Two consecutive tournaments for chess prodigy R. Praggnanandhaa resulted in a burn-out, as the 14-year-old finished ninth in the recently concluded U-20 championship. The last 22 days has been hectic for the youngster, who took part in two major events, the World Youth (U-18) and World junior (U-20) championships held at Mumbai and Delhi respectively.

Upon his return, Praggnanandhaa ‘s school, the Velammal MHSS of Chennai felicitated him for his achievement, when the young chess player explained about the burn-out, saying,

“I was tired playing back to back. There were tougher players (in U-20). That was the main thing. [Moreover]. I had cold too.”

“He has been playing without a break. Both U-18 & U-20 were tough. Now he needs rest.” his proud mother N. Nagalakshmi, confirmed on Wednesday.

Even though he finished ninth in the U-20 event; the Chennai boy clinched the U-18 World title and stated that the penultimate round proved to be crucial for him in the finals.

“It was the 10th round game (win over Pultinevicius Paulius of Lithuania). To get a half point lead (was important) over others,” he said.

Praggnanandhaa will now be on a break till his next tournament, the London Classic, which starts from December 1st. He will then travel to Spain for the Sunway Open starting December 13 onwards.