Chelsea are targeting to land Hirving Lozano in the upcoming winter transfer window. Maurizio Sarri is trying to build up a new Chelsea side which will play a new brand of football. 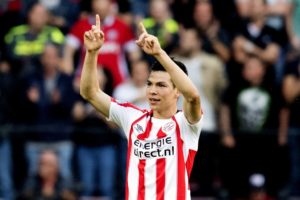 Maurizio Sarri prefers to play with a 4-3-3 formation. In this system, the team always need two quality wingers in the field. The Blues currently have Eden Hazard, Willian and Pedro as the wingers. They also have Victor Moses in their squad who can play as a winger. However, Maurizio Sarri does not like him to be in the pitch. So, Victor Moses is probably going out of the team in this winter transfer window.

According to Maurizio Sarri, Ruben Loftus Cheek can also play as a winger. The team management are also trying to push Callum Hudson Odoi as the future star left wing forward for the club. Willian is nowhere near his previous form in this season. So, Chelsea desperately need to sign a winger in this transfer window.

According to the sources, Chelsea are competing with AC Milan to bring in Hirving Lozano. They are also trying to secure the deal of Borussia Dortmund’s star winger Pulisic. If the Board of Chelsea are able to complete these two signings in this transfer window, Chelsea will surely be there in the contention to win the Premier League this season.