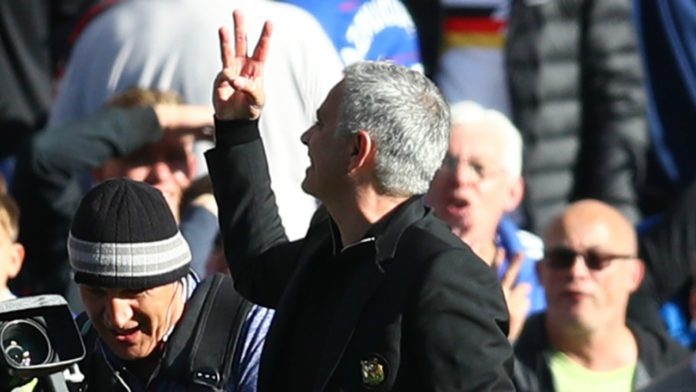 The supporters made their deduction after the Blues tweeted and re-tweeted posts in connection with the number three.

The Manchester United manager returned to Stamford Bridge on 20th October and his side came away with a 2-2 draw.

While the supporters at the stadium were making snide remarks towards Jose, the Portuguese rallied back by holding three fingers up to the crowd, referring to the number of Premier League titles he had won with the club.

Since then, Chelsea FC has been uploading posts in relation to the number three. Prior to the weekend’s Burnley clash, the club tweeted a gif of Jorginho holding up three fingers with the caption “Three hours to go”.

The Blues then uploaded a picture of Ross Barkley also holding up three fingers with the caption: “Ross Barkley is the first Englishman to score in three consecutive Premier League games for the Blues since Frank Lampard, back in 2013!”

Ross Barkley is the first Englishman to score in three consecutive @PremierLeague games for the Blues since Frank Lampard, back in 2013! 👏 #BURCHE pic.twitter.com/5dcJarfh3S

Some Chelsea fans believe this is no coincidence, one tweeted: “Our account slyly taking the p*** out of Mourinho or…”

Another posted: “Three hours to go? You know what 3 means? 3 titles more than every other manager together.”

Oh no is getting worse than we 1st thought…first Jose. then @rubey_lcheek now we got @RBarkley8
The 3 finger Jose salute is getting bigger after each game 😂😂😂 pic.twitter.com/Gn3B7K4zPJ

What's next, three fingers for three trophies with United?🤔 pic.twitter.com/eb2Iw6KeXg

Ross getting in on the Mourinho salute 😂😂😂😂

back at it with the mou salute