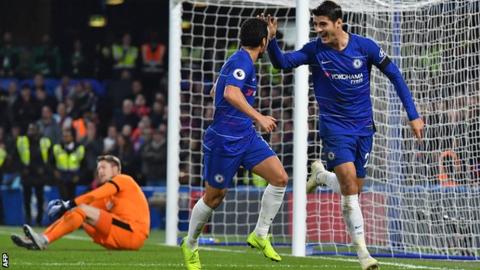 In a fairly competitive London derby between Chelsea and Crystal Palace, The Blues edge out their London rivals with a comfortable 3-1 win. Alvaro Morata seems to have found his scoring boots and an Eden Hazard back injury has not fazed cruise control Chelsea. 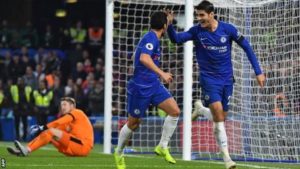 Even though Chelsea does not seem to be displaying the same panache as Man. City or the flamboyancy of Liverpool , the London outfit keep finding ways to stay in the title race.

Crystal Palace were threatening for a good amount of the game and even pegged a goal back. However, Chelsea never panicked and didn’t go on the backfoot to soak the pressure. Instead , they played fluidly and increased the lead enabling Eden Hazard to come on.

It took 91 seconds for the Belgian superstar to contribute to a goal in the form of an assist.

Sarri equalled a Premier League record here by extending his unbeaten start in the division to 11 matches, and it is the Italian’s team who are sandwiched between the more fancied contenders at present.

Pedro scored the final goal of the game which summed up Chelsea’s brilliance. A deft low cross by Marcos Alonso from the far left flank set Pedro up for a shot who finished as cleverly as required.

Chelsea are 2nd after overtaking Liverpool on goal difference and 2 points behind defending champions Manchester City.