This competition is an example of social integration and inclusion within the football world.

The Valencia CF training ground played host to the closing ceremony and trophy presentation for the 2018/19 LaLiga Genuine Santander campaign, which brought an end to a season in which 30 clubs have constantly championed values such as respect, camaraderie, friendship and teamwork.

LaLiga president Javier Tebas, Valencia president Anil Murty, Felipe Martin, head of sponsorship, events and social media at Santander Bank, Miguel Justribo, vice-president of branding and communication at the Telepizza Group, LaLiga ambassadors Cesar Sanchez and Marcos Senna, as well as representatives from the host club and LaLiga joined the LaLiga Genuine Santander players for the big finale and handed medals out to all participants. 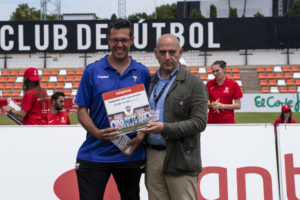 After seven months of competition, the champions of the second campaign proudly received their medals and trophies from Tebas and Murty. The Celta Integra Foundation clinched the sportsmanship trophy, having racked up 27 points in the table, the Malaga CF EDI Foundation took home the camaraderie trophy, thanks to a 26-point return, and the Athletic Club Foundation were once again crowned fair play champions, after registering 356 points for sportsmanship, respect and fair play in their fixtures throughout the season.

Tebas thanked Valencia for the club’s considerable involvement in the competition and stated, “This league is here to stay. This project is very special to LaLiga and all of us who are part of it are extremely proud. That’s why we’ll keep working hard so that it continues to grow season on season.” The LaLiga president also congratulated the trio of winners in the competition’s second campaign and had a kind message for them: “You’re the champions of this league and your values represent all of us.” 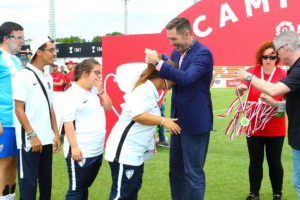 Murty thanked LaLiga in turn for organising such a huge project and described how Valencia have wanted to be involved in the initiative since the very beginning. He added, “This club and its foundation have been committed to the social inclusion of people with intellectual disabilities for many years. Being the hosts of LaLiga Genuine Santander has been an honour for us.”

The big finale was filled with surprises, with players and supporters being introduced to KOMOYO, the official LaLiga Genuine Santander mascot who was designed in collaboration with all the participating teams and represents the league’s values. Telepizza, one of the brands associated with the competition, wanted to give a little something to every club, with Justribo handing out personalised boxes containing photographs of the players.

The core values have not only played a key role on the pitch, but also in the stands at every venue that LaLiga Genuine Santander has visited, with fans and family members becoming increasingly involved in the league of values. The second season has stood out due to the incorporation of 12 more teams, taking the total up to 30. There have been four different phases held across six cities: Tarragona, Cordoba, A Coruña, Madrid, Segovia and Valencia, where nerves, emotions and joy have consistently shone through.