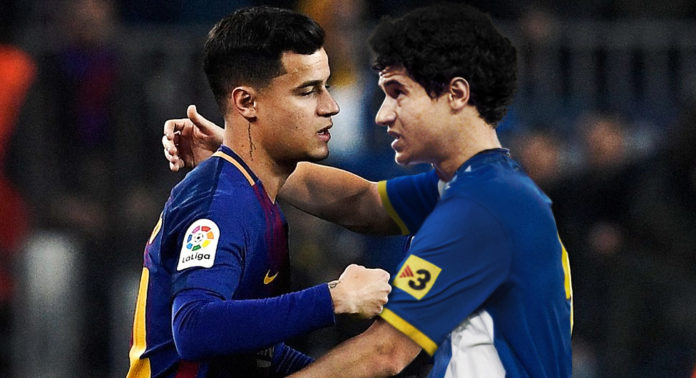 Espanyol have made an excellent start to their 2018/19 LaLiga Santander campaign and Marco Roca is one of the main reasons why. New coach Rubí has built the midfield around the 22-year-old midfielder, who is as highly adept at winning the ball back as he is at keeping possession. He’ll be vital ifLos Pericos are to hold their own in the centre of the park.

Coutinho took his first steps in Spanish football with Espanyol while on loan there during the 2011/12 season, so this will be a homecoming of sorts for him. With the Barcelona squad hit by a plethora of injuries ahead of this game, the one will be on will be on the club’s record signing to step up and to provide the leading support to Lionel Messi in attack.

Summer signing Iglesias has hit the ground running at Espanyol and has already become a fan favourite with his goals. The striker scored 23 goals in LaLiga 1l2l3 for Real Zaragoza last season and is already well on his way to matching those numbers in his first top-flight campaign with eight in the first 13 matches. This will be his first match against Barcelona and he’ll be keen to prove himself in his side’s biggest game of the season so far.

A club symbol at Barcelona, Piqué is always in the thick of things in this fixture. Last season he scored a late equaliser for Barcelona as they secured a dramatic 1-1 at the RCDE Stadium and will be instrumental in keeping it tight at the back as his side look to keep a clean sheet against an Espanyol side who aren’t shy in front of goal.

Any team that manages to pick up a point or even three against Barcelona’s all-conquering attack will need a strong performance from their goalkeeper. Diego Lopez’s performance could therefore be key, as he was last season making four big saves in a 1-1 draw. The 37-year-old knows all about big matches against Barcelona, given that he faced them three times between the sticks in a Real Madrid shirt