Chennai Super Kings (CSK) looking out of sorts in a rare phenomenon, being rooted to the bottom of the table is even rarer. After their emphatic 10-wicket win against Kings XI Punjab on Sunday, the Super Kings have not just notched up two important points, but just maybe have turned the tables for good.

Can the MS Dhoni-led outfit kick on from here in pursuit of their fourth IPL title? The rhetoric may sound a bit far-fetched at this juncture in the tournament, but the Yellow army have at least stem the rot, snapping their three-match losing streak in a commanding display of batting. 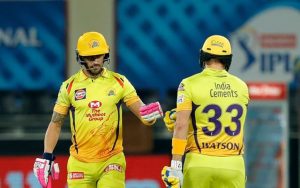 That the three-time winners have an ageing squad is no secret, with many players on the wrong side of 30. Even then, many expect them to advance to the playoffs because of the match-winners they possess. In addition to slow-turning wickets in the UAE, their spinners have the capability to turn the match on its head.

Having lifted three titles, in 2010, 2011 and 2018, and having reached the IPL final five other times, few teams have dominated the all-important IPL Playoffs like the Chennai Super Kings.

But this year, there were early indications that age might be catching up with a number of their stars and the rigours of the IPL might just catch them cold.

CSK and an indifferent start

So used to be on top of their game in the previous editions, sitting at the bottom of the points table now with three losses in four matches is unknown territory for the Mahendra Singh Dhoni-led side.

Nothing seemed to be working for them despite having the resources in the opening four rounds showing three defeats. A misfiring top-order, save Faf du Plessis, combined with inadequate run-flow in the middle overs and the habit of leaving way too much for the climax, proved to be their bane in the three consecutive defeats.

The story of the three losses was quite similar for the Chennai Super Kings as they suffered a top-order collapse before the middle-order batters tried to control the damage and rebuild it. Dhoni looked to have batted under tremendous pressure in the initial games and the huge expectations make his and his team’s failure look worse.

The exits of Harbhajan Singh and Suresh Raina are a body blow to Chennai Super Kings. In the opening four games, the Super Kings looked rusty and ragged. Generally, a decent fielding unit, their otherwise brilliant fielders were dropping chances to add to the misfields-making a sorry state of affairs for themselves. Skipper MS Dhoni, speaking after their third loss on the trot-talked about controllables-basics which needed to be done right.

The Chennai Super Kings have it in them to turn it around but everything—fielding, bowling and batting— have to come together. Over the years, they have made it a habit to turn the sticky situations around in their favour out of seemingly impossible scenarios.

When the result goes a team’s way, many of the frailties get hidden but even the smallest of things get exposed when the opposite happens.

CSK will need one of their top-order batsmen to put runs on the board and run-rate in the middle overs need to be taken care of, too. If that happens, it will allow Dhoni to find his feet.

Dhoni has batted under tremendous pressure in the initial games and the huge expectations make his and his team’s failure look worse. By the time he goes after the attack, the asking rate would soar to unprecedented levels.

Each time CSK has played they have qualified into the playoffs of the tournament and they will want to continue that trend.

Chennai Super Kings might make it to the playoffs as usual, but their inability to seise the key moments might hurt them again. However, the brilliance of MS Dhoni is such that he can utilise the best from any position. Having finally cracked a winning formula, can the Super Kings now get on a roll like they’ve done several times in the past?