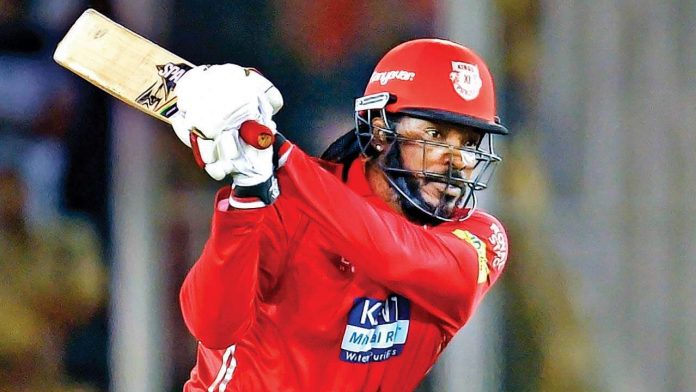 Kings XI Punjab’s Chris Gayle, the ‘Universe Boss,’ announced his arrival in style with a 53 as he and KL Rahul (61 not out) took the team just over the line on Thursday.

In a bid to snap their five-match losing streak, KXIP managed to find a way to play Gayle, albeit at an unfamiliar No.3 position, and the West Indian made an immediate impact with a match-winning knock of 53 off 45 balls which included five sixes, making a big statement.
However, as has been the case with KXIP this season, they almost bottled the chase as there was some last-minute drama with Gayle getting run out in the last over.

Nicholas Pooran walked in with still a run to get off the last over against Yuzvendra Chahal. The West Indian kept his nerves to finish the chase with a six.

Gayle’s involvement in the tournament was delayed by food poisoning, leading to a spell in hospital. He batted at an unfamiliar batting position at No 3 on Thursday to make his first appearance of the season. Batting at No 3, the West Indian took time, as he always does, to get his eye in.

Having suffered five defeats in a row, the calls to include the T20 legend could no longer be ignored by Kings XI Punjab. On the back of a nervy yet crucial win, can Gayle lead the way for their revival?

This is Rahul’s first stint as captain in the IPL and the Kings XI leader said team’s performance mattered more than his. Rahul conceded that the entire team was relieved to register a win after six successive defeats in IPL 2020 and underlined his thought saying the Kings XI is a far better side than the points table suggests. His impressive form along with fellow opening batsman Mayank Agarwal have been the only positives for the Kings, for whom the campaign has been nothing short of disappointments.

However, Gayle’s inclusion may yet change it all. The shift of momentum can do wonders in T20 cricket, and if the KXIP can build on this win, they could cause a surprise or two yet. They certainly have the firepower in their batting department with Gayle’s inclusion. And if the bowling unit can sort of their lengths, Punjab can still turn it around, albeit against the odds as it stands.

Gayle’s inclusion may have been a desperate decision, to begin with, but, in the end, it turned out to be a smart gamble. Gayle’s dismantling of Sundar foiled RCB’s plans as the off-spinner went for 31 runs in his final two overs which proved crucial. Gayle and K L Rahul played it safe and took the game to the final over, where they nearly messed up another run chase.

The 41-year-old self-styled “Universe Boss” who recently recovered from a stomach bug, smashed five sixes in his 45-ball knock to announce his arrival in the United Arab Emirates.
The in-form Rahul consolidated his top spot in the IPL batting chart with 448 runs as the opener struck his fourth fifty – he has hit a hundred as well – of the season.

Rahul put on 78 with opening partner Mayank Agarwal, who made 45 off 25 deliveries before becoming Chahal’s 200th T20 victim. Punjab though still languish at the bottom of the eight-team table with two wins from eight games. Reaching playoffs is still mathematically achievable for KXIP, but the scope for a setback is minuscule.

Universe Boss ⁦@henrygayle⁩ is BACK. Sensational 50* off 36 balls with 5 huge 6s. He remains the greatest entertainer in batting history. pic.twitter.com/6MO5NSBGHB

And while Gayle’s return to the playing 11 itself was celebrated by fans on social media, his match-winning knock was the icing on the cake. From fans to former cricketers, everyone was relieved to see Gayle back in the park. The former West Indies cricketer, who was warming the benches so far, finally got a chance in the KXIP Playing XI and sent a strong message to those who wrote him off.

The southpaw smashed 5 sixes and a boundary during his stay at the crease. En route his 29th IPL fifty on Thursday, Gayle also achieved a rare of scoring 10000 runs in fours and sixes in the T20s. The Jamaican has so far smashed 1027 fours and 982 sixes in T20 cricket, a unique feat. He also holds the distinction to be the first cricketer to amass 10000 T20 runs. Only Shoaib Malik and Kieron Pollard are the others to have aggregated 10000 T20 runs in their career.

The flamboyant left-handed batsman was on the verge of making to the Playing XI a couple of matches ago but head coach Anil Kumble had then revealed that the Jamaican was laid low. His presence will surely galvanise the KXIP unit. Whether that transpires into change of fortunes for the side-remains to be seen.

Why DC have the look of IPL champions