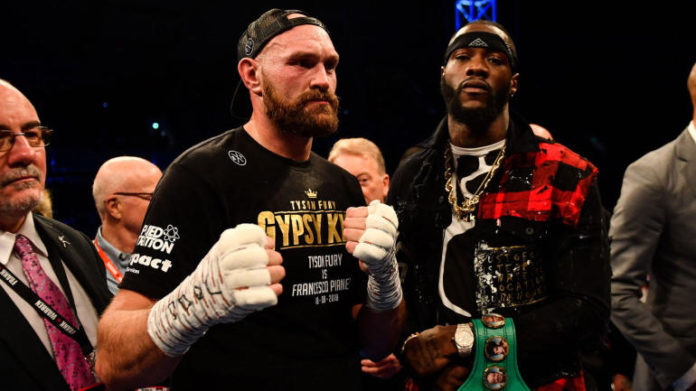 Tyson Fury and Deontay Wilder met again at the second leg of their press tour in New York on Tuesday. Both fighters promised fireworks.

Speaking today in New York, the Bronze Bomber vowed to knock out the Gypsy King, who is fighting for only the third time since his comeback.

During the second stop of their three-city media tour which took place in New York City on the deck of the retired aircraft carrier Intrepid, which is now a sea, air and space museum in Manhattan but on Tuesday hosted a carnival.

Fury told the press conference: “I want to thank everybody for turning up. And even Deontay knows to sit down in the presence of greatness.

“He can’t box, he’s knocked bums out, he fights tomato cans who can’t fight back. He’s not going to land one of those windmills on my chin.

“His a*** is going to fall out. How am I going to let this skinny little spaghetti hoop man beat me? I didn’t come here to be embarrassed by this little runt.

To win would be a dream come true. But when I win I’m going to let him keep his belts. I don’t want that belt. I want the Tyson Fury limited edition WBC belt.

“I’m a crazy man. I want a war with this little plum. I want to break his ribs. I’m going to make this bum quit. This man has never fought a champion. And this idiot thinks he’s going to beat something.

“You all know he works for me right? He’s a dosser, carries my bags around.

“Last note, I’m going to knock this bum spark out. And you heard it here first.”

It looked like Tyson Fury was getting under Deontay Wilder’s skin, as he angrily took on the mike and said:

“People want to see knockouts and I deliver that each and every time. I promise you I’m going to knock out the gypsy king. Timber!”

End of an Era: HBO is done with boxing after 45 years