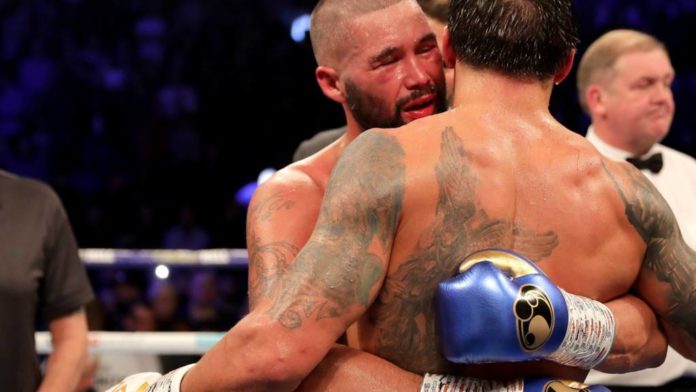 Tony Bellew ambition to become Britain’s second undisputed cruiserweight champion didn’t come to fruition as Ukrainian star Oleksandr Usyk brutally knocked him out in the eight round to successfully defend his undefeated record and his much cherished WBA, IBF, WBC, and WBO world cruiserweight world title at the Manchester Arena. 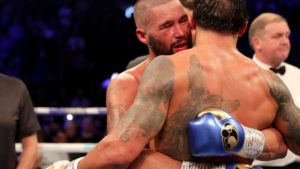 Liverpudlian Tony Bellew started brilliantly for the first three rounds, he was cautiously outboxing Usyk, but after the fourth round, Usyk was able to get his momentum back and took the fight to Bellew and then Usyk rocked Bellew with a stiff jab and followed it up with a huge left hand to send the challenger tumbling into the ropes, ending the fight.

Twitter went frenzy over that brutal knockout by Usyk.

I tried my best and gave it everything I had! You my friend @usykaa are a great champion and the best fighter I have ever faced. You beat me fair and square.. I only wish you well going forward and thank you for the opportunity. 👊

Emotional final press conference for Tony Bellew who broke down in tears at one point. He said he felt he failed by losing. He was quickly put right by his wife. British, Commonwealth, European and world champion. That's a long way from failure.

Congrats to @usykaa on a spectacular win. @TonyBellew hold ur head high. Nothing but respect for u. #UsykBellew

No disgrace in getting beat by Usyk fantastic boxer!!Tony has made Liverpool proud over the years!!Topman!

If that is truly the last dance for Tony Bellew, then absolutely full credit to him for not just tonight, but what's he produced over the last few years. Becoming a world champion in his beloved football club's ground, upsetting David Haye and ending it against a great in Usyk.

That was a fucking masterclass. Took his time to figure out Bellew and annihilated him. Absolutely stunning from Usyk.

Oleksandr Usyk travelling the World and beating guys up convincingly in their backyard is just marvelous. What a boxer. P4P #1 now.

So proud of Bellew boxed brilliant. Showed his ability that many doubted. Usyk was very clever made him work hard throughout and showed how good he is. No shame losing to someone like him. Bellews had a career people can only dream of unbelievable! Now enjoy what you earned x

Respect to Bellew and Usyk, unreal desire by Bellew but fair play to Usyk! Amazing skills and deserved the win in the end! 🙌🏼

Hahaha they asked Eddie Hearn will he match Usyk with Joshua and he completely dodged it.

No, Usyk isn't as athletic or graceful as Lomachenko. But that's like comparing a defensive end to a cornerback in terms of agility and quickness. For his size, Usyk is a unicorn athletically … .#boxing

Oleksandr Usyk will be Fighter of the Year, no doubt about that. He's already beaten the top two RING ranked fighters at cruiserweight, won the biggest money fight in division history. Nothing left to prove at 200 pounds, would love to see him jump into the heavyweight picture.

Usyk's engine and ring IQ is just worlds apart from everyone else. Bellew put up a valiant effort just as I thought he would, but at the end of the day, he was up against the greatest Cruiserweight ever. Love the fight, and the respect shown at the end. 👏👏 #UsykBellew

Usyk realises bellew slipping his backhand. Then adjusts then starts to loop it. Made all the difference in the fight. Amazing ring smarts

Usyk is without doubt the Fighter of the Year for 2018. Cleaned out the cruiserweight division, unified all four major titles, won the Ring belt & defended against a top-rated challenger. Not only that, he fought three times, a rarity in the modern era. Inoue deserves runner-up.

An absolute honour to watch Usyk tonight. As much as I like Bellew, seeing Usyk in action that close was just sensational.

Usyk is a magician. Unreal.

All the praise, all the belts, all the feels.

Unlucky Bellew, but Usyk is just a different level man