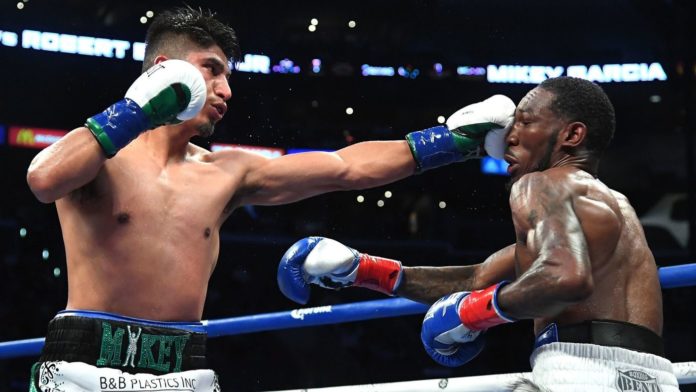 Mikey Garcia has defeated Robert Easter Jr. to unify the WBC & IBF Lightweight titles at the Staples Center in L.A. The highly anticipated unification showdown ended in a decision. The scores were 116-111, 117-110, 118-109; all in favor of Garcia.

Easter (21-1, 14 KOs), the now former IBF champion, did an effective job using his height and reach in the first two rounds. He strategically employed the jab to keep his opponent at a distance. However, WBC titlist Garcia (39-0, 30 KOs) stepped up the pace during the end of the second round and throughout round 3. 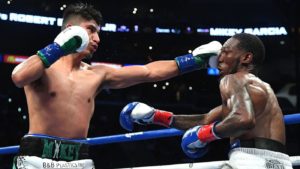 Mikey began to close the distance and started landing with a jab of his own. With 25 seconds to go in the third round, Garcia struck! He put Easter down by way of a right hand-left hook combination. The momentum continued for Mikey in round 4.

Round 5 and 6 went the way of Easter, as he did a really good job of re-establishing the distance and pace. However, starting in the 7th round, Easter’s punch rate dropped as he did more moving around the ring than actual punching. Al the while, Garcia kept up the steady pressure; landing shots to both the body and head.

Round 9 was the best round of the fight. Easter stood his ground and fought toe-to-toe with Garcia. Big punches were landed by both men. Consequently, towards the end of the round, you could see the pace of that round and of the fight in total had taken its toll on Easter – fatigued as he walked back to the corner.

Easter was game and tough the last three rounds, but Garcia was in control. Continuing the theme all night, Garcia continued to apply the pressure; slowly but surely chopping.

After the fight, Garcia called for a championship match against current IBF Welterweight Champion Errol Spence, Jr. That’s a daunting task for Garcia and the fight most boxing fans would really like to see for Garcia in the immediate future is a showdown with WBA Lightweight champion Vasyl Lomanchenko.