Fighting in his hometown for the first time since 2010 and the first time as a pro the Belfast boy Michael Conlan got a rapturous welcome as well as a nice “step up” win. It wasn’t all fireworks, but the world amateur gold medal winner came out a clear winner despite facing a genuine step up. 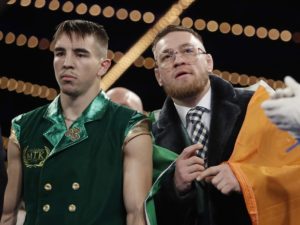 The former Olympian emerged with 7 rounds to 1 points win over a recent world title challenger in just his eighth professional fight. Conlan not only seemed to be the better fighter physically but also the sharper mentally has he dominated Brazilian Adeilson Dos Santos and look comfortable in against a fighter that reached world level when he challenged Jessie Magdaleno for the WBO super bantamweight title as recent as April of last year.

The visiting fighter was game but was simply outmatched by Conlan. The win see’s Conlan push his unbeaten record to 8-0 with 5KO’s while Dos Santos falls to 19-5. Conlan will now look toward a revenge clash with former Olympic foe Vladimir Nikitin, who is also signed to Bob Arum’s Top Rank.