In a fight that could have easily been scored as a draw through the first four rounds, it ended in an unexpected fifth round stoppage. Both fighters really took turns in feeling each other out in the first two rounds. Fielding was trying to time Zeuge as he would move inside.

The champion would try to bully the taller fighter and keep him on his back foot. He was successful in doing this which granted him the winner of those two rounds. 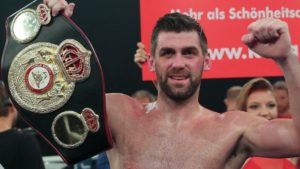 In round three, the tide started to turn a bit and it was evident that Fielding had found the proper range and timing. As Zeuge would step in with wild shots, the challenger would step back and pepper him with combinations.

Round four was the start of the end for the champion. Consequently, while sitting too long in the pocket, he was caught with a well placed right hook to the temple. This setup a flurry from Fielding that caused the champion to cover-up and retreat.

It appeared the effects of round four could not be shaken off. From the start of round five, Zeuge was on his bicycle. Fielding then targeted his attack more to the body. He would start up top and finish with left and right hooks to the body.

Ultimately, an uppercut on the inside followed by a left hook to the liver put the champion down. As Zeuge struggled to get to his feet, his corner had seen enough and threw in the towel.

Fielding has been eager to continue his career in a big way after suffering a crushing first round knockout loss to Callum Smith in 2015. He has done just that, and is now a champion at super middleweight.