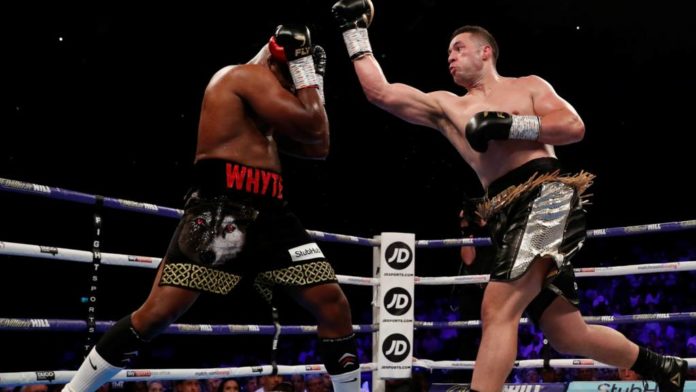 Dillian Whyte and Joseph Parker engaged in a high-grade dance in front of 20,000 fans without delivering the candidate for fight of the year many had expected.

Both men spent a few rounds measuring each other before periodically looking to take the initiative.

What resulted in the latter rounds was a myriad of inaccurate punches from both fighters.

A knockdown scored for Whyte in the second round initially sparked some excitement from the fans.

However, it was clear that a head-butt coupled with Parker being off balance were the reasons for him losing his footing. It ended up being a mistake on the referee that gave Whyte an extra point in the round. 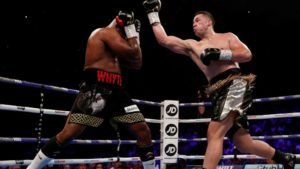 Although neither fighter was effective in terms of landing shots, by the middle rounds, Whyte was clearly the only one trying to make the fight.

Parker stayed on his back-foot. He would open up with a two-punch combination at times, but was reluctant to follow up. On the other hand, Whyte kept applying pressure. For every four shots he would miss, he would land one big one.

As the fight drug on into the middle rounds, it was like watching a sparring session. The ninth round saw Whyte land a flush left hook after Parker threw a lazy right hook to the body.

Watching Parker crumble to the canvas only lead one to believe he had absolutely no chance of winning the fight unless he scored a knockout.

After hearing the pleading from trainer Kevin Barry, Parker seemed to turn it on in the championship rounds. He landed some monstrous shots that seemed to back Whyte up for the first time.

In the twelfth round, Parker was a different fighter. He stalked Whyte until he landed a big right had that sent him to the canvas.

Unfortunately, there were only seconds left in the round. Parker tried desperately to finish his opponent, but Whyte held on for dear life until the final bell rang.

In the end, it was a little too late for Parker. All three judges scored the fight for the hometown fighter.

Afterward, Whyte adopted Adrien Broner’s “The Can-Man” title and called out Anthony Joshua for a rematch!