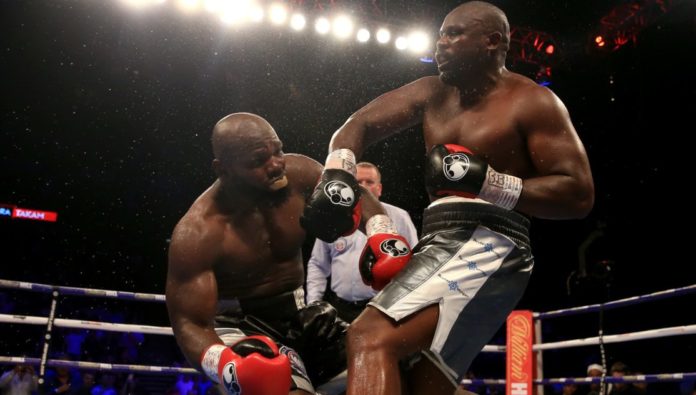 Dereck Chisora incredibly knocked out Carlos Takam in a comeback victory that took the roof off The O2.

The popular heavyweight was on the verge of defeat until he uncorked two colossal right hands in the eighth round – Takam, who took Anthony Joshua into the 10th round last year, was floored twice and could not recover on the second occasion.

Both men are known for having excellent chins and that was surely on display in this fight; at least early on.

Takam came into this fight like a pitbull who had just seen a piece of raw meat! He stayed on top of Chisora, backing him into the ropes and landing thudding shots to the body and head. 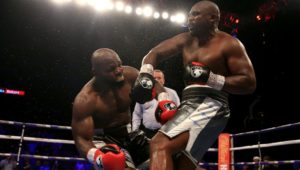 Though being hit, Chisora seemed to be calm and collected. He would sneak uppercuts and hooks in on occasion looking to land a big shot that would hurt Takam.

This tactic started to pay dividends by the fifth round. As Takam kept up the high pace, Chisora found a home for the left hook up top and right hook down low.

The tone of the fight started to turn into “volume and aggression vs economical, but accurate punching.”

Then, shortly after the start of the eighth round, BOOM! Derek Chisora landed a HUGE sneaky right hand while Takam came in and floored him.

His legs looked a bit shaky, but he was able to make the count. As soon as the referee signaled for the fight to continue, BOOM! Another right hand immediately ends this fight!

This is a great example of knowing how to keep calm under pressure and understanding when to take opportunities as they come.

For Takam, this outcome was very reminiscent of his fight with Alexander Povetkin in 2014.

With this win, Chisora has reincarnated his career for the time being as he is now being considered a formidable challenger in the division again.

He improves to 29-8, 21 KOs. In the post fight interview, he expressed his interest in fighting the winner of Whyte/Parker.