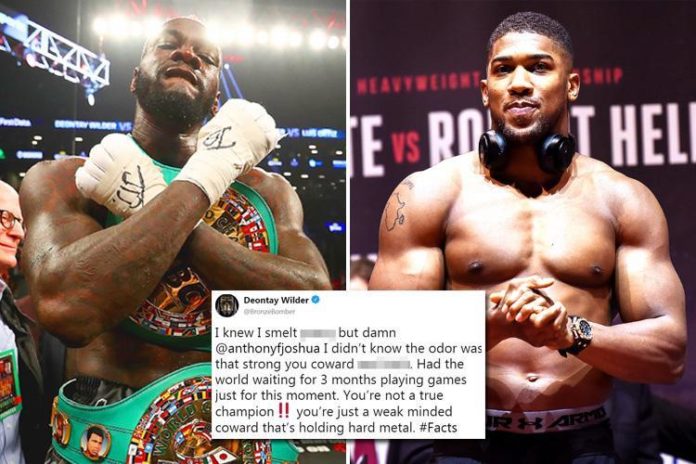 Deontay Wilder took to Twitter late Wednesday in Alabama to tell the world his fight with Anthony Joshua isn’t happening. 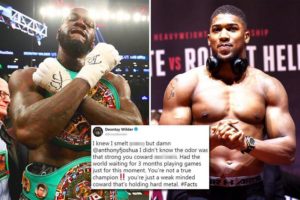 “My team and I bent over backwards pause Accepting everything they threw at us to find out this Boy is terrified of me P—,” Wilder wrote. “3 months of Tea Parties by grown men they didn’t even have British hospitality and offer biscuits w/ the tea smh Damn!!

“I said all this past s— to tell the story and to apologize, I’m sorry guys they played us all. F— ’em!! We move forward the future is still bright #51-0 baby let’s go.”

This comes on the heels of Eddie Hearn’s interview with iFL TV where Joshua’s promoter expressed frustration with Wilder’s promoter Shelly Finkel’s handling of the contract for the two men to fight and unify the heavyweight championship of the world.

“However low your intellect may be, just understand one thing for me, if you want this fight, supposedly more than anything in the world and I send you a contract, why in the f— am I not getting anything back for six days?” Hearn said in an interview with iFL TV. “And then being told that in another six days you’ll get my comments? So 11 or 12 days to get comments on a contract that apparently we’re all so desperate to sign.

For now it appears Wilder has given up on the fight, but with the way boxing is, it may be too soon to close the book on this one. This is the fight fans all over the world want to see and there is a lot of money to be made with it.

While it may not happen immediately, or even soon, odds are it will happen eventually, but this certainly appears to be a substantial road block.