Ever since the announcement took place that Deontay Wilder will not be fighting Anthony Joshua, the war of words between the parties involved in making fights from both sides of the pond has been very vocal on Social Media. From Eddie Hearn to President of Showtime Sports Stephen Espinoza, all have been on the verbal assault on each other on Twitter.

As part of the charade, Hearn had left the offer to Wilder on the table and even added a little to it by offering Wilder an intermediate fight for $5M against whomever he choses to take place this fall on DAZN – Hearn’s new broadcast partner in America. He left the $15M deal to face Joshua out there as well which would mean two fights for $20M. 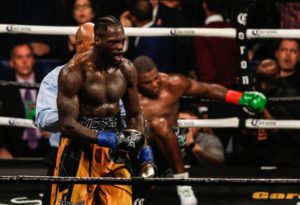 Apparently Wilder is not interested in the new offer at all as he had this to say to WBN;

“F*** Hearn,” said Wilder, regarding the DAZN offer. “We’re done with that. Only thing we needed was the belt to unify. The $50 million is off the table. That flat fee I was going to take … all that is off the table. If they ever come back to us, it’s going to be 50-50 straight down the line. I’m just glad the blindfolds are off the people’s eyes. Even casual fans can see what happened. For those that can’t see, the ones I call Eddie’s zombies, they can be a fool behind him.”

Although the offer is drastically more than any other payday of Wilder’s career he feels it’s a matter of principle now and has vowed he will not fight Joshua unless it’s a 50/50 deal now. Maybe he’s trying to copy a page from Gennady Golovkin’s playbook here but I don’t think he ever gets a 50/50 deal and neither did Golovkin. The sport has become way too much about who’s the A-side and B-side for that to happen.

Wilder says he’s going for the 51-0 record and that’s that. He could, however, increase his market value by taking the right fights his next couple of times out. Former champion Tyson Fury “called out” Wilder earlier this week and Wilder said he is definitely interested in that fight. It’s a fight that would definitely help build up Wilder’s profile and especially in the UK.

The WBC champion is expected to return to the ring this fall on Showtime but he’s not sure who is opponent may be yet. Dominic Breazeale is the mandatory challenger and who most expect it will be.