Gennady Golovkin might have lost his middleweight crowns to Canelo Alvarez in a hard-fought fight last month and his contract with HBO might have expired, he is still one of the biggest free agents in Boxing. The fight generated 1.1 million pay-per-view buys, fewer than the 1.3 million from their controversial split draw in September 2017.

According to a report from RingTV, former middleweight champion Gennady Golovkin is now in advanced talks with DAZN to join their streaming platform, per their industry sources. 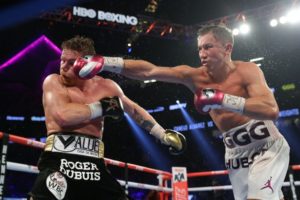 DAZN earlier this month signed Canelo Alvarez in what was described as the biggest contracts in sports history. He signed an 11-fight, a 5-year deal which is worth $365 Million and the first fight in his contract starts on Dec.15 when he fights Rocky Fielding for the WBA Middleweight title.

It also makes sense for Golovkin to sign with DAZN considering, they now have three of the four middleweight titles under their stable. The most recent addition was WBO middleweight champion, Demetrius Andrade.

Also, a contract with DAZN could mean a trilogy fight with Canelo Alvarez which was a massive hit amongst fight fans as both fights were able to eclipse a million PPV buys and both fights generated a gate of $27 Million and $24 Million respectively, making it the 3rd and 4th biggest boxing gate of all time.