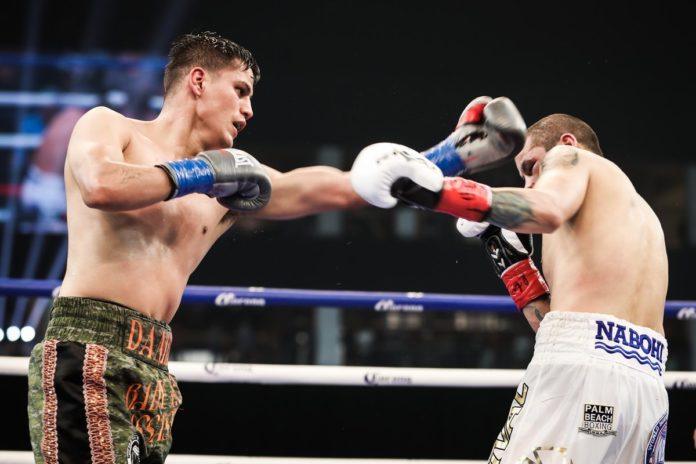 Controversy preceded this fight as Flores missed weight by a pound rendering him ineligible to fight for the title. There was no feeling out period as both men traded punches early on. They matched each other punch for punch with Roman landing some good shots to the body. In the third round, Roman began using a little more movement landing some solid shots on Flores.

Flores to his credit kept coming forward letting his hands go but it was Roman picking him off and making him pay landing combinations to the head and body. Roman began to assert himself in the bout as Flores began to lose steam on his punches. 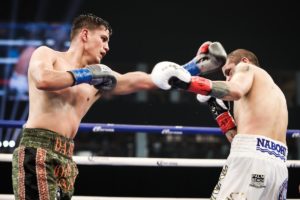 Roman continuously mixed up his attack but it was the tremendous work to the body that began to standout. Flores kept coming forward, unfortunately, he was applying ineffective pressure. It was Roman landing the cleaner harder punches, slowly breaking the challenger down.

Flores began to absorb a lot punches as the fight went on. Roman began to do anything he pleased going down the stretch landing hooks to the head and body along with uppercuts from short and long distance. It was a gutsy performance by Flores as he kept coming forward trying to make something happen.

Roman was simply the more precise boxer, showing a more diversified attack. He landed his combinations, stepping to the side constantly leaving Flores out of position. Flores made the champion earn everything in the bout, as he just let his hands go throughout.

Going into the championship rounds Flores clearly needed a knockout to win the fight. Flores just kept coming in head first leaving himself open all night. It was a good consistent performance for Roman as he hasn’t suffered a lost since 2013.