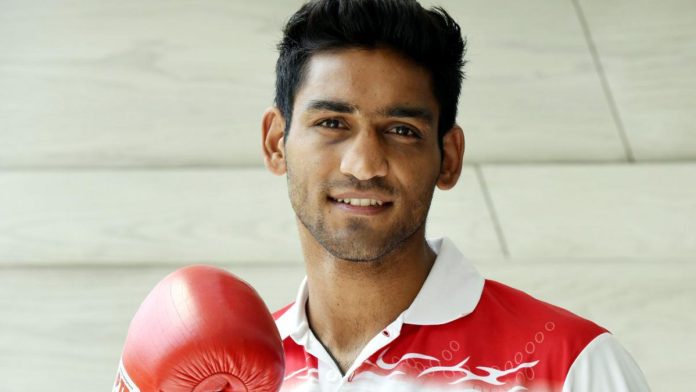 Indian boxer Ashish Kumar Chaudhury, who returned from his maiden Olympics appearance empty handed last year, is aiming to fill that void with a gold medal finish at the upcoming Commonwealth Games in Birmingham.

Back in 2020, Ashish Kumar earned his Tokyo Olympic berth with a semifinal finish and winning bronze at the 2020 Asia/Oceania Olympics Qualifier and became the first boxer out of Himachal Pradesh to qualify for the Games.

Unfortunately, the middleweight pugilist’s Tokyo Olympics campaign ended with a 0-5 loss in the Round of 32 stage against China’s Tuohetaerbieke Tanglatihan. But this time, the 28-year-old wants to make amends by clinching gold at the CWG.

“Tokyo Olympics was my first major tournament in terms of games. The pressure was new for me but now I have the experience on how to handle these things and I think this time I will be able to do better and give my best,” Ashish Kumar Chaudhary said in an interview with ANI, “I would like to fill the Olympics void over here at Commonwealth Games and I hope as well as I will try my best to compensate for that by winning a gold medal.”

Ashish is part of the 12-member Indian boxing contingent, comprising of eight male and four female boxers in total, who will represent India at the CWG 2022, commencing from 28th July.

“Our preparation is going on well for the Commonwealth Games,” the 2015 National Games gold medallist went on, “We have just reached from Ireland where we learnt a lot of things. There were a lot of teams which were already there before.”

“It was a multi-nation camp. We got an opportunity to play with the other CWG countries which are participating. We got a chance to practise with them. It was very beneficial for us. The reason why we were asked to train in Ireland was to get familiar with the environment and atmosphere,” added Ashish.