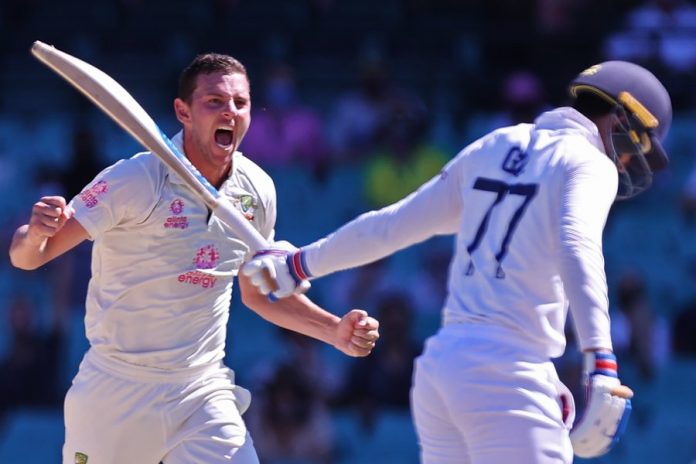 Historically, over the years short-pitched bowling is often considered as the Achilles heel of Indian batsmen. The absence of express fast bowlers in domestic cricket and the slower pitches are factors that come into play in the way they go about their trade in the Border-Gavaskar Trophy. That mirrored the way Indian batsmen struggled against the short ball in foreign shores and the pull shot (and the hook), often used to counter short pitches bowling, was hardly a weapon that Indian batsmen used too often.

There was a visible change in the way the Indians dealt with short-pitched bowling and used it as a scoring opportunity rather than getting bogged down by it. Even during the Border-Gavaskar Trophy in 2018, where India triumphed by the margin of 2-1-Indian batsmen effectively used the cuts, pulls and short-arm jabs as their scoring options. Talking of the Indian cricketers in the past, their repetitive failure against short-pitched deliveries had given a strong weapon to their opponents: “Bounce them out,” this was the strategy against yesteryears Indian cricketers.

During the first two Tests of the ongoing Border-Gavaskar Trophy, Indians countered the short-balls with relative comfort. However, injuries to Mohammed Shami, Ravindra Jadeja and Rishabh Pant, who all were fending off the bouncers-the talk of technique against bouncers has resurfaced yet again!

One of the standout points of the series so far has been the number of injuries suffered by India so far. Mohammed Shami, Umesh Yadav, Ravindra Jadeja all have suffered injuries during the course of the Border-Gavaskar Trophy and subsequently have been ruled out of the series from the point of injury. Swashbuckling wicket-keeper batsman Rishabh Pant also was taken for scans during the course of the day’s play at the Sydney Cricket Ground (SCG). And apart from Umesh, who suffered a calf injury while running-up to bowl in Melbourne-all other injuries happened while trying to negotiate short-pitched barrage from the Australian speedsters.

Mohammed Shami got himself in an awkward position and got hit on the right wrist, while Ravindra Jadeja couldn’t fend off a rising delivery, which got the better of his left thumb. Rishabh Pant too, was in serious discomfort as he misjudged a steep ball and got hit on his left elbow.

In the age of T20 cricket, where batsman are willing to take more risks-negating short-balls becomes that much more trickier. One needs high-levels of concentration and application.

India’s tour of Australia has already had a few incidents in which players have suffered concussion – in the first T20I, Ravindra Jadeja had to be substituted after copping a blow, with Yuzvendra Chahal controversially replacing him in the XI and leading the side to victory.

On the first day of the second warm-up match between the Indians and Australia A a pink-ball affair, Jasprit Bumrah’s drive hit Cameron Green, the bowler, on the head while he was following through – he was concussed and had to be replaced in the XI.

Huge moment! The Aussies get a major breakthrough right before stumps.#AUSvIND | @hcltech pic.twitter.com/6Zww1W383l

That said, over the last two and a half decades, Indian batsmen have become far better players against fast, short-pitched bowling and plenty of batsmen have emerged who played the pull shot expertly during the Border-Gavaskar Trophy. To a large extent, gone are the days where the Indians were rattled by short stuff dished out at them.

Ever since stand-in skipper Ajinkya Rahane first started playing for India, he has been regarded as one of the most technically correct batsmen in the side and when it comes to playing the short ball, he hardly ever puts a foot wrong. Along with him, Rohit Sharma and Shubman Gill too, have looked rather comfortable against short balls. Gill in specific has the ability to pick the length of the ball early on and that is a gift that very few players possess.

By and large, although India certainly have their short-ball strategy covered, they still have a lot of work to do to ensure that they don’t get in awkward positions while playing short balls. None the less, as the series goes on, the batters will play even more crucial role for India-and for that they’ll have to be on their toes-literally!