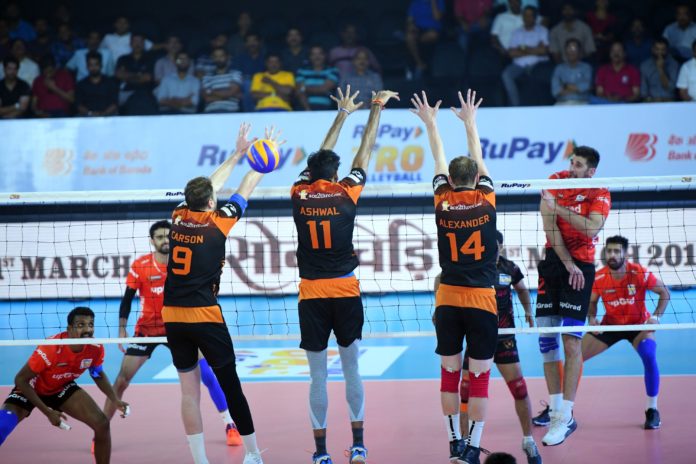 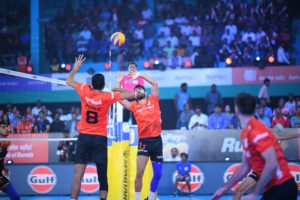 In the first set, both teams didn’t give an inch and were neck to neck almost all through the set. U Mumba’s Shubham Chaudhary came up with a Super Serve while both teams were tied at 3-3 to give his team a two-point advantage. Hyderabad soon closed the gap and both were tied at 6-6. U Mumba wrested the initiative just at Technical Time Out (TTO) with an 8-6 lead. Post TTO, U Mumba called for a Super Point at 10-9 and converted on Hyderabad’s serve. Hyderabad did the same as they converted their Super Point right after, thanks to a wayward serve by Pankaj Sharma. It was a tight last few points but U Mumba finally came through 15-13 to win the first set.

A similar story was to unfold in the second set, as no team held a clear advantage. Both teams countered each other and at 7-7 it was an error on the spike by Prince which helped Hyderabad hold a point advantage at TTO. Hyderabad came out all guns blazing as they raced to a 12-9 lead benefitting from U Mumba’s mistakes. U Mumba called for a Super Point and converted with Sharma’s spike to drive hopes of a comeback. Raison Rebello made sure that doesn’t happen as he scored two of the last three points for Hyderabad with a block and spike to close the set 15-11 and level the match 1-1.

U Mumba started with more intent as they scored four straight points, three of which came from spikes by Sharma, Dipesh Sinha and Vinit Kumar. U Mumba kept on piling the pressure and went into the TTO leading 8-3. U Mumba didn’t let the lead slip and put up a dominant display with four spike points and three blocks to close the set 15-7 and lead 2-1 in the match.

In the penultimate set, Hyderabad showed more intent and didn’t allow Mumbai any breakthrough till 6-6. U Mumba like the first set again took an 8-6 lead as a serve point by Kumar and a spike by Sharma gave them the cushion. Hyderabad came back strongly and levelled the score with two spikes and a block by Rohit Kumar at 9-9. Nick Del Bianco from U Mumba came to the party as he aced a Super Serve to give his team a 12-10 lead.  At 11-13 Hyderabad called for a Super Point and converted to stay alive in the match. The Super Point gave a lift to Hyderabad and they closed the set 15-14 and establish parity in the match.

U Mumba started in style in the final set as they raced to a 6-3 lead with skipper Sinha and Kumar combined to score five out of the six points. But Hyderabad wasn’t going to let U Mumba take the game away as they soon levelled the score and then went into a lead with skipper Carson Clark and Alex Bader scoring five consecutive spike points. The score stood at 8-6 in Hyderabad’s favour. The run of points finally stopped when a spike by Prince gave U Mumba the break at 7-9. U Mumba called for a Super Point at 8-11 and converted as the match was poised for a thriller at 10-11 in Hyderabad’s favour. Hyderabad called for a Super Point and won it with a block by Rohit Kumar. Hyderabad scripted an epic comeback as they won the set 15-11 and the match 3-2.

Calicut Heroes will take on Ahmedabad Defenders on February 13th 2019. It will be broadcast Live and Exclusive on SONY SIX and SONY TEN 3 and will be streamed live on SONY LIV from 6:50 PM IST.

Everything you need to know about Prime Volleyball League 2022

Asian U-23 Volleyball Championships: India falter in the final hurdle and settle for silver