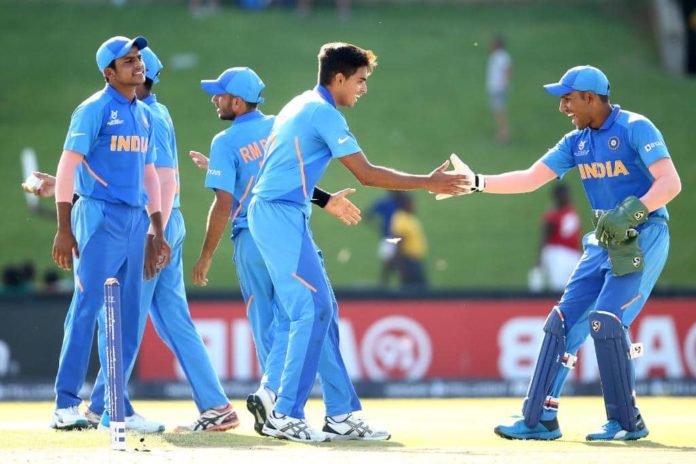 India U19 continued their juggernaut in the U19 World Cup as the defending champions defeated first timers Japan by 10 wickets.

India captain Priyam Garg won the toss and elected to field. India made three changes to their team who won the first game against Sri Lanka. 15 year old Kumar Kushagra played his first game of the world cup along with Shaswat Rawat and Vidyadhar Patil.

Indian bowlers were on the mark from ball 1 as Kartik Tyagi and Akash Singh both put pressure on the young Japanese batting lie up and got their wickets at regular intervals. 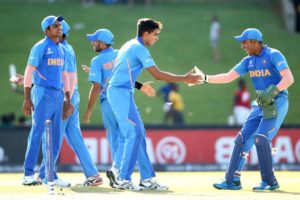 Kartik Tyagi was the first to register his name on the wickets column. Kartik first counted for the captain Marcus Thurgate and then got the wicket of Neel Date the next ball.

Tyagi conceeded 10 runs in his spell of 6 overs with 9 of the runs coming via wide. Tyagi then took the 3rd wicket and restricted the Japanese to 14 for 3. It was then the spell of Ravi Bishnoi who then broke the backbone of the young Japanese batting line up and they were seen tottering at 19 for 6 at the end of 10 overs.

It was then upto Vidyadhar Patil and Akash Singh who put break on the Japanese batting lineup and brought it to a close.

Japan were bundled out for 41 , which was the second lowest total in the history of the U19 World Cup.

Yashasvi Jaiswal scored 29 off 18 balls which included 5 fours and 1 gigantic six over long off.

Kumar Kushagra scored 13 runs off 11 balls and also scored the winning runs helping India win the match by 10 wickets and putting one foot into the quarter finals of the U19 World Cup.

Ravi Bishnoi was adjudged the man of the match for his phenomenal performance with the ball as the leg spinner accounted for 4 of the Japanese Batsman and conceded only 5 runs in his 8 overs.

India after the win will be confident of there chances in the world cup as India will now face New Zealand in their last group stage game and will like to finish the group stages with a win.

On the other hand Japan will now face Sri Lanka who lost their first game to India on Sunday, by a comprehensive margin.