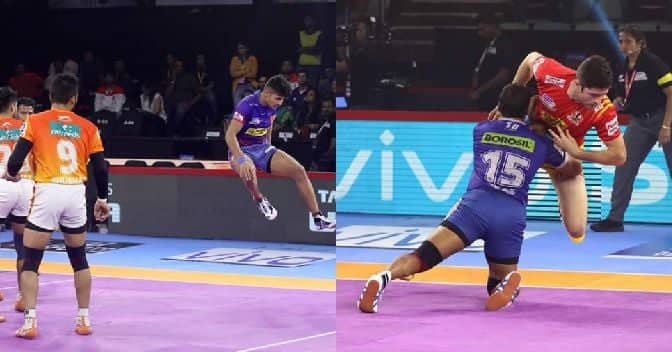 Convincing wins for Dabang Delhi and Haryana Steelers helped them consolidate their position in the points table as Haryana Steelers climbed the ladder to 3rd position ad Dabang Delhi continued to top the table. An all-round performance for the steelers helped them to defeat the two-time runner ups Gujarat Fortunegiants, Brilliant performance by raider Prashant Kumar Rai and defender Ravi Kumar helped the Steelers defeat the fortunegiants. On the other hand a level-headed approach and a scintillating performance by Joginder Narwal and star-raider Naveen Kumar helped Dabang Delhi defeat U Mumba. 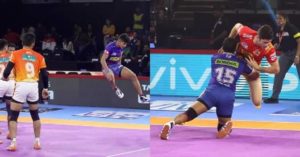 A breath-taking all-round performance by the Steelers helped them defeat the Gujarat Fortunegiants and climb the points table to reach 3rd Position. Performances by raiders Prashant Kumar Rai, Vikash Kandola and defenders Ravi Kumar and Vikas Kale gave the steelers a comprehensible win. Fortunegiants again looked bleak after the win against the Patna Pirates. Fortunegiants had started of well but gave an unnecessary all-out to help the steelers dominate them and defeat them.

It was a show ruled by the Delhi defense where defenders Ravinder Pahal and Joginder Narwal played their hearts out to defeat the U Mumba. The performance by the Delhi defenders overshadowed the performance of Naveen Kumar who went on to score yet another super-10. Mumba defender Snadeep Narwal showed great caliber in collecting 5 tackle points but that wasn’t enough to defeat the high flying Dabang Delhi.\

Day 5 of the Delhi leg will see the Bengal Warriors take on the Ajay Thakur led Tamil Thalaivas. The Thalaivas will lokk to improve their record after a dreadful homeleg.