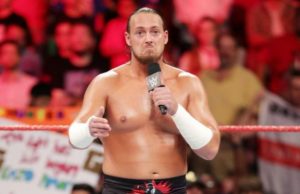 Following his release by WWE earlier this year in June, Big C, formerly known as Big Cass, made his first appearance on the independent circuit last week. The 7 footer was fired by his former employers after the Money In the Bank PPV primarily on the grounds of behavioural and personal conduct issues.

Big C made an impromptu visit to Championship Wrestling League (CWL), returning to the ring after three months and immediately opened about his WWE release.

He asserted that there are only three people in this world that know why he was ousted by WWE but rather, decided to reveal the names on a later date, on a network special about him instead of a low and unknown platform like the CWL.

This narrative still remains a myth and all wrestling fans must wait further as Big C has saved the occasion for a much bigger and world-renowned independent show to share his side of the story.

On that note, here’s a look at the entire video of Big C’s promo on CWL: