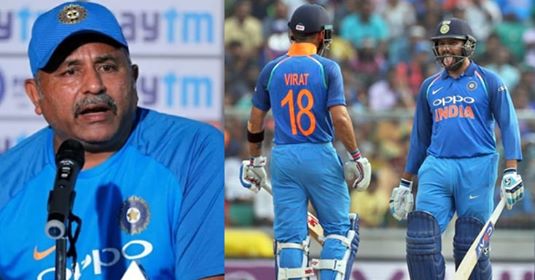 Since India has crashed out of the World Cup in the semi-finals, there have been various rumours doing rounds. One such rumour is about a difference in opinion between Rohit Sharma and Virat Kohli. There have been suggestions coming in to have split-captaincy across formats. However, the team management has not paid any heed to such suggestions.

India’s bowling coach, Bharat Arun has commented on these rumours. He said that we do have some differences in opinions, but it is all sorted out.

“It’s not that we agree on everything. We have our differences and arguments on various aspects like team composition and strategy. Everyone is given the liberty to voice their opinions. In the end, everyone’s opinions are respected and a collective decision is taken,” Arun said.

There were rumours of BCCI looking towards a split-captaincy alternative. Virat would remain the test captain in such a scenario. However, Rohit Sharma would take-over limited-overs captaincy. However, there was no truth in these rumours. Kohli was announced captain for all three formats for the West Indies tour.

India will start their tour in West Indies from the 3rd of August. Both the teams will lock horns in three T20Is, three ODIs and two tests. Earlier today, the Indian squad for all three formats was announced. While most players walked into the side, certain names missed out.

MS Dhoni won’t be travelling to the West Indies as he has a commitment towards paramilitary forces. Hardik Pandya will be missing this series due to a groin injury, whereas Jasprit Bumrah has been rested for the limited-overs matches. Dinesh Karthik has not retained his place in the side. However, Kedar Jadhav managed to retain his place in the ODI side. Among the players who made it to the side, Krunal Pandya, Shreyas Iyer, Deepak and Rahul Chahar and Washington Sundar are notable names. Navdeep Saini would most probably be making his debut in this series, as he replaces Bumrah.

In the test team, Rohit Sharma has found a place, while Wriddhiman Saha has made a comeback.