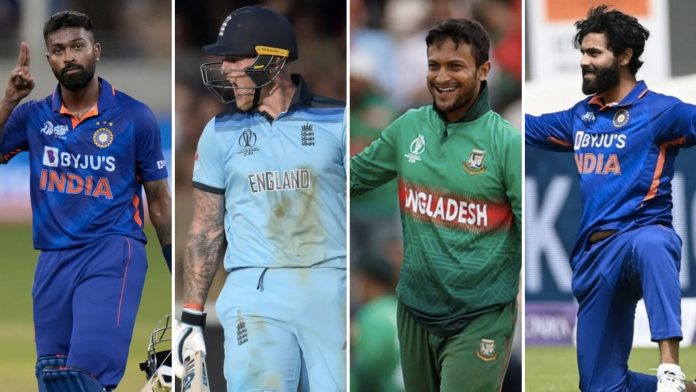 Hardik Pandya showed his quality with the bat and the ball in India’s famous victory over Pakistan in the Asia Cup in 2022 and, in doing so, the Gujarat Titans captain has established himself as one of his country’s most important players.

Here is a look at who are the best all-rounders in cricket today, taking into account all three formats of the game.

Kicking off the list with the aforementioned Pandya, since making his debut for India in 2016, Hardik has been viewed as a special talent. Now at the age of 28, he is proving to be even more reliable for his country, with the years of experience on the pitch showing.

Pandya has picked up the mantle left by MS Dhoni as a player who can finish off an innings strongly. His match-winning score against Pakistan in the Asia Cup was a great example of that. He did not panic at any stage, hitting the winning six with two balls to spare, to the delight of the BCCI board.

One of the areas where Pandya has also improved his game over the last couple of years is his bowling, as the Guardian highlighted in India’s recent tour of England. He is a key part of his side’s pace attack in white ball cricket, taking wickets at important points in a match.

Pandya is set to feature for India at the T20 World Cup in Australia later this year and, as of the 29th of August, India are the +300 joint-favorites in the Betway betting for the trophy. The 2007 winners will be hoping Pandya can produce some more big performances at the tournament.

Ben Stokes is now the captain of the England Test team, and it is a role within the ECB that he seems to be thriving under. His team are playing an aggressive brand of cricket, which mirrors his style of play.

Stokes has been the hero for England so often over the last few years. In 2019, it was his innings that helped his country win the ICC World Cup for the first time in their history. Just weeks later, he produced a stunning unbeaten 163 to steer his team home in the third Ashes Test against Australia. The hosts looked certain to be heading towards defeat before he arrived at the cease.

The Englishman opted to retire from ODI cricket earlier this year to concentrate on the Test and T20 games. He has been a regular in the IPL where he has also had a lot of success with the Rajasthan Royals.

Bangladesh’s Shakib Al Hasan is in the top three of the ICC all-rounder rankings in all formats of the game. In ODI cricket, he holds the top spot ahead of Mohammad Nabi and Rashid Khan respectively.

The 35-year-old has been playing international cricket since 2006 and he remains at the top of his game. He is the captain of Bangladesh’s Test and T20 teams and his experience is proving invaluable to the younger players in the squad.

Al Hasan has picked up over 600 wickets for Bangladesh with his slow left-arm orthodox bowling, but it is with the bat where he often really shines. He can hit the ball a long way, as many of his opponents have found, particularly at the 2019 Cricket World Cup, as you can see from the Standard report of their victory over the West Indies.

The middle-order batsman scored 217 runs in an innings for Bangladesh in a Test match against New Zealand in 2017, as highlighted in the BBC report on the game. It is the second-highest score ever recorded from a Bangladeshi player in international cricket. Mushfiqur Rahim broke Al Hasan’s record with an unbeaten 219 in 2018 against Zimbabwe.

India’s Ravindra Jadeja has got it all as a cricketer. Not only is he a fine bowler and batsman, but he is also excellent 0n the field. The 33-year-old is the number one ranked all-rounder in Test cricket.

The left-handed batsman and bowler has made three centuries and 17 half centuries in the Test arena. He averages 36.56 with the bat, while his bowling average is 24.71. Jadeja’s best bowling figures are 7/48.

Such is Jadeja’s ability, if he wasn’t an all-rounder, he would be picked by India as a bowler or batsman. As the latter, he plays an important role in the middle order for his team, often saving them when the players above him have got out cheaply.

All four of the above players will be seen at the T20 World Cup in Australia. They will be hoping they can help their team lift the trophy in the final on November 13.