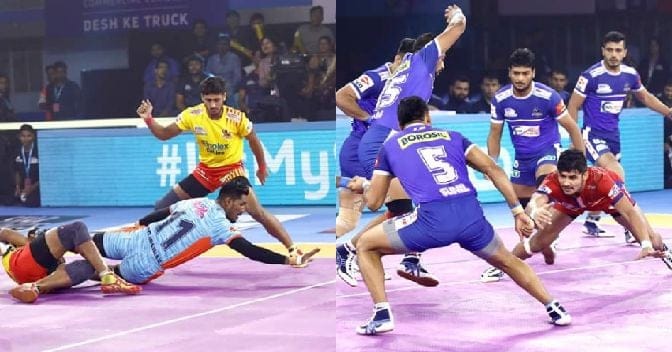 The first day of Kolkata Leg of Pro Kabaddi League season 7 saw the hosts Bengal Warriors and two-time runner-ups play a hard fought tie where a raid by Maninder Singh in the penultimate minute of the game helped the Bengal Warriors tie against the Gujarat Fortunegiants. In the second game of the day at Netaji Shubash Chandra Bose Indoor Stadium Haryana Steelers toppled the the table toppers Dabang Delhi K.C to win their fifth game in a row to consolidate their position at the top of the table. 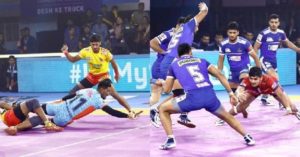 A game which was called as the clash of the captains ended in the favor of the Bengal captain Maninder as he got hold off his opposite number five times in the game. It was Sonu Jaglan of the fortunegiants who got 6 total points in the game. It was Maninder’s raid in the penultimate minute which helped the hosts clinch a draw as his opposite number came advance to tackle him but failed as the Bengal captain gained two points to level the scoreline.

An all-round performance from the Haryana Steelers and an off day at office for the table toppers Dabang Delhi handed the Haryana Steelers their fifth win in a row. It was performances by Vikas Kandola and Prashanth Kumar Rai who completed their individual super 10 to help the Steelers win the game. On the other hand Naveen Kumar the star Delhi raider completed yet another super 10 but it was not enough for the Delhi side to win the game.