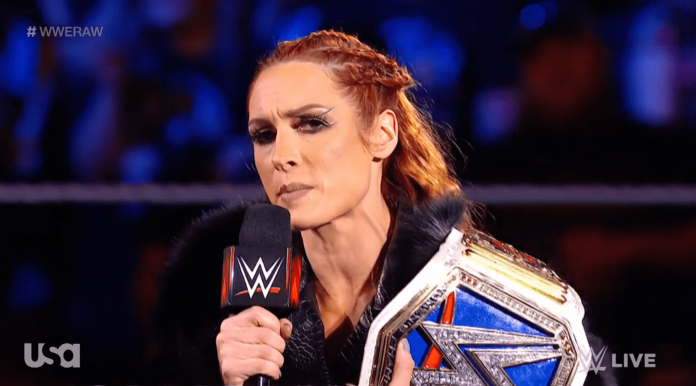 Becky Lynch is a huge star of WWE and she sits at the top of the women’s division of RAW(she recently got drafted during WWE Draft 2021). There are a handful of stars who have their eyes on the title. It seems Lynch will go to any extent to hold onto it as she retained the title against former champion Bianca Belair via Disqualification at Extreme Rules pay-per-view. But now, ‘The Man’ recently joked that it is her daughter, Roux who could be able to dethrone her.

Becky Lynch shares a picture of her daughter

Lynch shared a photo of her baby daughter, Roux, playing with her WWE SmackDown Women’s Championship title. She took to her official Twitter account and posted the picture. She wrote the following in the caption: “The only lady that has a chance at taking this title off me.”

The only lady that has a chance at taking this title off me. pic.twitter.com/yPqQiSg3gP

Becky Lynch and his husband, WWE star Seth Rollins were blessed with their first child, baby daughter Roux on December 4 last year. Lynch was on a hiatus for more than a year until she made her much-awaited return at SummerSlam pay-per-view a couple of months back.

She was shockingly announced as the replacement of Sasha Banks, who was slated to take on then-SmackDown Women’s Champion Bianca Belair. It was ‘Big Time Becks’ who got the better of the champ and she pinned her for the title in 26 seconds.

She went on to successfully defend her title against Belair in a rematch at Extreme Rules pay-per-view. Now, ‘The Man’ has a huge task on her hands as she will go up against not one but two huge stars of the company, Sasha Banks and Bianca Belair in a triple threat match at Saudi Arabia pay-per-view, Crown Jewel in Riyadh, Saudi Arabia. The event is set to take place on Thursday, October 21.