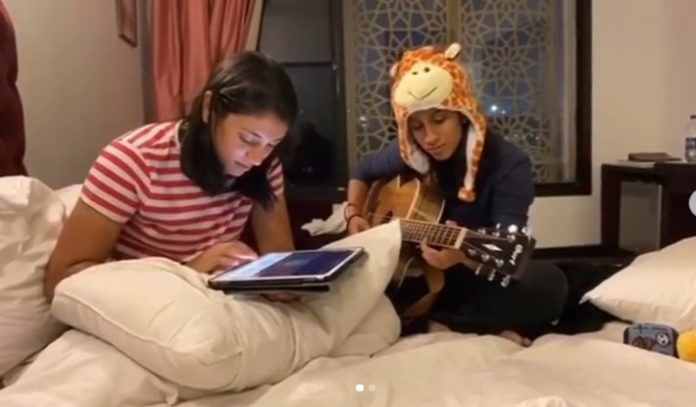 The ongoing worldwide lockdown has halted all sporting activities across the world and athletes have found themselves with an enormous amount of spare time at their disposal. While some are keeping themselves busy by interacting with their followers through social media regularly, some like Smriti Mandhana are trying their hand at some other creative activities. Recently, the Indian opener shared a video on her Instagram channel where she was seen playing a popular Hindi song with her teammate Jemimah Rodrigues.

On Tuesday, Mandhana shared a couple of videos on her social media account (which also featured her colleague Jemimah) where the duo appeared to be busy playing the famous Hindi track “Main Koi Aisa Geet Gaoon” from Shah Rukh Khan’s ‘Yes Boss’ movie. While Mandhana was playing the tune on her gadget, Jemimah played the tune on her guitar, with a fantastic sync.

Apart from irritating each other this is what we do in our free time🤪🤪 @jemimahrodrigues P.S: Don't miss the 2nd video😛 . . 🎥: @radhay21 @shafalisverma17

“Apart from irritating each other this is what we do in our free time @jemimahrodrigues. P.S: Don’t miss the 2nd video,” Mandhana captioned.

And naturally the video went viral within no time and has gathered over 200,000 likes so far.

Meanwhile, the second clip was a blooper reel, in which Smriti and Jemimah were seen struggling to coordinate with one another as the latter was heard saying that she “forgot” the tune on several occasions.

In a Twitter Q&A session last week, Mandhana picked Hrithik Roshan as her favourite actor and admitted that she loves to trouble her sibling during the spare time.

“The other thing I like is spending time with my family. We love playing cards. I help my mother with cooking. I guess washing utensils has become a part of my daily routine. However, my favourite pass time is to trouble my brother,” she said.

Discover How the Covid 19 Crisis is Affecting Cricket Stars